American television sitcoms, at least the good ones, are great in their dependability. You know what you’ll get. You’ll know why you want it and when you want it. They become like a favorite piece of furniture in our living rooms — the armchair you can curl up in when you know nothing else will feel quite right.

The Office has been my armchair for the last eight years. It’s not always been perfect — in fact it’s been quite imperfect over the last two seasons — but it’s the television show I’ve watched more than anything else. I’ve seen all 200-plus episodes more than once. I’ve had more than one dream that featured a character from The Office. Is this the clinical definition of obsession? Quite possibly. 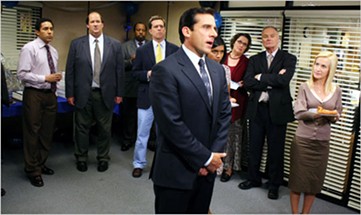 But again, this show is somehow comforting to me. It’s a glass of warm milk, if you will. I often write late into the night a lot and when I wrap up, I can never get right to sleep. A couple years ago, I took to watching an episode — usually whatever reruns TBS had placed On Demand — before going to bed. It has become a ritual of sorts. And when the series comes to an end tonight after nine seasons, in the words of Michael Scott, it’s going to “hurt like a motherf*****.”

I watch The Office because it makes the mundane in our lives outrageous, unlike the Everybody Loves Raymond or Two and a Half Mens of the world, which manage to make the outrageous mundane. There is no reason why a show that, at least in its first few seasons, took place almost exclusively within the depressing confines of a fluorescent-lit office, should have survived this long.

In the beginning, The Office was very much realistic. Cubicle warriors working in any field could relate with the banal yet hilarious conflicts and controversies that arose at the Scranton branch of Dunder Mifflin. The characters have, over the years, engaged in bouts of hatred, love, acceptance and apathy — and if you’ve worked in an office you know how this goes. Small things become huge things because the unfortunate reality (a reality you’d rather not acknowledge) is that you spend more time with these coworkers than you do with your spouse or kids.

At Dunder Mifflin we’ve seen Dwight hate Andy and love Angela while adoring Michael and designating Jim as his mortal enemy. Then, over the years, those relationships flip-flopped and rotated, sometimes not with the sort of comedic promise producers would have hoped for, but in a way we could allow ourselves to believe would happen at our own place of employment.

Seinfeld featured a few of the best characters in the history of television, but their egomaniacal hijinks weren’t the sort of scenarios in which you could imagine yourself entangled. Sure, there is likely no boss out there with the sort of need-to-be-loved that Steve Carell laid out in The Office, but if you talk about how your boss is a “little bit of a Michael Scott,” people know what you mean because they’ve had a boss like that at some point. Everything about the work environment on this show was amplified (we’re not going to believe that someone like Kevin Malone could ever survive in a full time job for more than a week), but it never took us too far away from what could possibly happen under the fluorescent lights of our own offices.

This isn’t a popular opinion, but the American version of The Office executed this relatable-ness more effectively than its British forefather. Ricky Gervais is a god, but his take on the boss was more vaudevillian than what we Americans could relate to. That version was hilarious and legendary in its own right, but it’s the American version that’s going to live on forever.

I’ll keep watching The Office as the years go by. Probably late at night, and probably episodes I’ve seen a dozen times. I’ll watch it because I feel like I’ve been sitting at one of those desks in Scranton all those years.

The mystery of Howard Parrish and the Spokane fire of 1889