The Blue Spark, a 14-year fixture of the downtown bar scene, announced its sudden closure Monday. Owner Bernard McGuire cited threatening loiterers and vandalism as primary factors in the closure.

Operating in the shadow of the long-vacant Ridpath Hotel, the Blue Spark complained of repeated damage, public urination and other disturbances near the bar. McGuire accused city officials of ignoring his concerns.

“The city has told us that unless someone is bleeding or dying, ‘don’t call us,’” he tells the Inlander. “They aren’t here to help us, that is the bottom line.”

Straub acknowledges the Ridpath has become a problem area, attracting vandalism and homeless groups to its darkened doorways. But he argues his officers have made regular efforts to patrol the area and respond to any reported issues.

“I understand his frustration with the Ridpath and the people that are hanging around there,” he says of McGuire. “But I think his statements, that the police department is not responsive, I’m not sure that’s really accurate.”

Records also show 50 calls to the Ridpath property with officers responding to 92 percent of those calls.

Straub says the legal issues surrounding the possession of the Ridpath have made it difficult to hold the owners accountable for building maintenance, nearby vandalism and sidewalk upkeep.

“The Ridpath again is not just a police problem, right?” he says. “It’s kind of a community problem.”

“We have to figure out as a community, how do we allow people, who look and act differently than we do, to use this space,” Straub said last month at the opening of a new substation. “How do we establish a norm of what we as a community expect for behavior in our downtown space?”

When speaking Wednesday on a new downtown quality of life initiative, Mayor David Condon said many city departments have been coming together to make Spokane a safer and more beautiful city.

He noted part of the mission will involve targeting problem areas or eyesores such as the Ridpath, which can attract illegal activity.

“It’s the broken-window syndrome,” he says, explaining such areas create an environment for public safety or nuisance problems.

Mark Richard, president of the Downtown Spokane Partnership, says some businesses have voiced concerns about homeless loiterers, but overall crime and safety in downtown has improved.

“We certainly believe downtown is safe,” he says. “We want people to feel safe.”

Richards notes establishments next door to Beignets and the Blue Spark have not reported trouble attracting customers. He says he hasn’t ever operated a bar or restaurant, but it’s a “hard business.”

The Ridpath remains a high priority for the downtown business community, he says. The group has worked with the police department to power wash the sidewalks and clean the area around the hotel.

Richard says he has also contacted the building’s investors about installing additional lighting or putting up window facades to improve the appearance of the structure.

Any solution will probably involve a balance of enforcement and extending social services, he says. Officers should deter illegal activity while community groups work to connect people to shelters or other programs.

Bridget Cannon, youth programs director with Volunteers of America, says she had not heard of any problems with young loiterers in the area. The program operates a youth shelter one block away from the Blue Spark.

“Nobody ever registered any complaints with us,” she says.

Cannon and other local homeless shelter officials say any group, homeless or otherwise, may have a few people who cause problems. But it’s unfair to blame an entire population for a few bad apples.

“So what do you do?” Cannon asks. “Kick everybody out of downtown?"

Chey Scott contributed to this report. 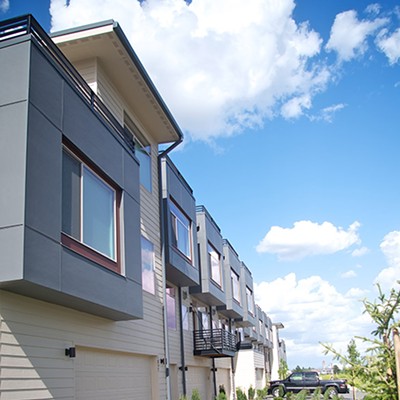