HEALTH: Raising money, hoping for a diagnosis after years without one 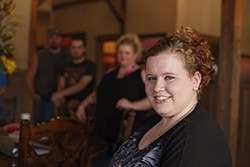 Young Kwak
Alexandria Beeler is raising money for a trip to the Mayo Clinic in Arizona.

No one knows exactly what’s wrong with Alexandria Beeler’s brain.

For more than half her life, the 22-year-old has been in and out of doctors’ offices trying to get answers. Doctors can see scarring on the left side of her brain, which causes left-sided weakness and other problems. They’ve done three brain biopsies and ruled out lots of diagnoses — but haven’t found the answer.

This August, Beeler is headed to the Mayo Clinic in Arizona for one more opportunity to be seen by experts. “It’s basically my last chance for answers,” she says.

She is featured in our upcoming issue of InHealth, in a story about the increasing number of people who are turning to social media and sites like FundRazr, GiveForward and GoFundMe for crowdfunding their medical expenses. Many, like Beeler, are covered by health insurance but still find themselves saddled with huge bills for transportation, living expenses and costs that insurance won’t cover.

Beeler and her family set up a FundRazr campaign and other fundraisers, like selling bracelets, to pay for airfare, food and hotel costs for the trip. Mayo could tell them only to expect an “extended stay,” so they’re budgeting for three weeks. After that, Beeler needs to be back for classes at Eastern Washington University.

“Our hopes are that they figure it out and they fix it — but we know that’s not reality,” says Beeler’s mother, Leasa Bolen.

Still, any chance for possible treatment options or knowing what to expect is worth taking. They’re getting close to the goal, and it’s possible that airfare will be covered by Angel Flight. Many of the donations so far are from people who know the family and have wanted answers, too, but other donations are anonymous.

“It just makes you know that people have a heart,” Bolen says.

Read more about Beeler here, including ways to contribute, and look for the story in the August-September issue of InHealth.