How "immobile" are older mobile homes? 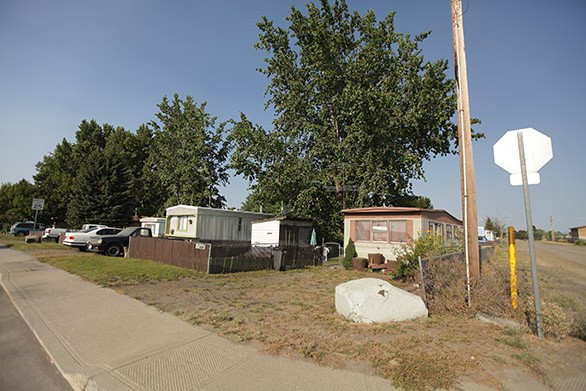 Young Kwak
The Lawson Mobile Home Park is the subject of an Inlander story this week.

When Robert Cochran, the property manager for the Contempo Mobile Home Park, read The Inlander’s storyon the challenges of relocating mobile home residents in the FairchildAir Force Base Crash zone, one part caught his eye: “Many of the mobile homes are so old they’ve ceased to be mobile. Modern parks refuse to take them.”

Cochran called up The Inlander to emphasize that, often, older homes actually can be moved. He himself has moved homes nearly 50 years old.

So it’s worth spending a few hundred words unpacking what challenges these old mobile homes have in moving.

The first problem can genuinely be structural. Airway Heights mayor Patrick Rushing talks about homes that have rotting floors and leaking roofs. One home, he said, actually had holes in the middle of the floor,forcing residents to jump over them when they moved from room to room. According to a book on the subject, some mobile homes are so rundown they can’t be moved without literally falling apart.

The next problem is legal. There are considerable legal hurdlesto moving a motorhome built before 1976, especially to take on the highway. Older homes, Commissioner Al French says, have to be lifted onto a flatbed trucks. But that’s a more expensive, difficult task. (Also, a city or county can waive many of those rules in the event of a mobile home park closure.)

The final problem is finding a place to move the mobile home parks to. By Washington State law, mobile home parks are barred from banning homesfor the sole reason that they are too old. But parks have other standards, that have to do with the quality of the homes themselves. When French helped move the Charter mobile home park at Lyons and Nevada, he says the homes had to upgrade things like electricity and heating to be accepted at the new homes.

At some point, French argues, it becomes cheaper to buy a whole new manufactured home than upgrade the old one. Of course, in this case, if the ballot proposition passes, the county will have money to pay for some of those upgrade/relocation costs.

I asked Cochran if I could quote a section of one of his emails, and he agreed:

I'm not arguing that many of the homes in question in Airway Heights are not substandard or quality dwellings- they mayv ery well be less-than-ideal homes. But there needs to be a context that shows simply being an older home does not preclude it from being perfectly fine and able to be relocated. Once relocated, it will be the same less-than-ideal home. The average reader need not be led to believe all mobile homes poor people live in are the equivalent of depression-era tarpaper shacks destined to fall apart if moved.

In all cases, the government's involvement in any relocation effort can facilitate waivers of all kinds and eliminate red tape in order to allow the home owners to keep their homes albeit elsewhere. If that is the goal. If the goal is to eliminate the eyesore of old "trailers" and keep poor folks out, then in all likelihood every barrier will be shored up to make the prospect of relocating the people's homes impossible for them.

But in the bigger picture for other manufactured home owners out there (in fact it is standard practice to refer to all as manufactured homes) who find themselves considering the prospects of their community closing, they need to be informed that there is a process and protections for them in WA:

Twelve months' notice must be given before any home may be evicted from the property when a community closes.

Homes forced to move cannot be required to meet current building codes if the homes remain the owners' residences.

Relocation assistance is available from the state to reimburse moving costs for those low-income home owners forced to move. (Downside, it is reimbursement, meaning the folks need money ahead of time to move—although in this case, the county could guarantee the costs for them perhaps.)

And, the vast majority of manufactured homes, no matter their age, are able to be moved when needed without traumatic damage or herculean efforts. For homes without solid floors or those with questionable home-made alterations, all bets are off of course. It is the exception, the small percentage of older homes that suffer costly damage when moved. The social question of shouldhomes of questionable condition be relocated needs to be answered separate from a blanket declaration of immovability. And if society says no, then steps need to be taken to help the home owners without imposing a punishment.

Instead, he suggests, the county might consider pursuing "no-frills utilitarian development to house the homes that can be moved, supplemented with used homes purchased in the region to replace those deemed uninhabitable..."

THIS WEEKEND IN MUSIC: Outlaws roll through