Chris Bovey
When he was a kid growing up in Spokane, Ryan Lewis once told his dad he wondered what it would be like to perform at the Spokane Arena. Last night, a packed house of more than 8,000 people at the venue gave him that answer. Bringing along his better-known half, Macklemore (the one featured on the cover of Rolling Stone), the show absolutely did not disappoint.

Filled with mostly young people, and their parents or older chaperons, there were many in thrift shop apparel. Items made famous by the Seattle-based hip-hop duo’s music videos — terrible leopard print fur-lined coats and black Spanish cowboys hats — were everywhere.

Nearly 30 minutes after the second opener (a highly engaging Talib Kweli) had left, the overture began and lights danced over the black curtain. Finally, it dropped and Macklemore, wearing a Shawn Kemp Sonics jersey paired with a plaid kilt) rose up through the floor welcomed by mass hysteria, kicking it all off with “Ten Thousand Hours.”

From high above on his DJ perch, Lewis served as conductor over the production. And was it ever a production. Not only was there a brass section (impeccable trumpet and trombone), they also hauled in in a violinist and cellist, not to mention a trio of very flexible dancers, huge video screens and pyrotechnics galore.

Surprisingly, a few songs in, their massive No. 1 hit “Thrift Shop” was already going full throttle, but there was more craziness to come, although you wouldn't guess that by the way the crowd reacted, pulling out phones to document.

Macklemore, aka Ben Haggerty, was born to be on stage. He was born to share his testimony of getting off drugs and alcohol and acceptance for all. In between some songs, the rapper could get a bit long-winded with his speeches, but while many musicians preach about marijuana legalization and the atrocities of war, Macklemore's set had a more inclusive message. After laying down the gay-rights anthem, “Same Love,” he even invited two local girls out on stage for one to ask the other to her Homecoming dance.

Highlights from the show included: “My Oh My,” the tribute to the legendary Dave Niehaus and the Mariners’ historic 1995 run (the song that causes me to tear up no matter what), the crazy encore of “And We Danced,” and of course, the part where Lewis said, “I can’t tell you how good it feels to be home.”

Even with so much going on it was hard to take your eyes off of Macklemore. His charisma, the sweat dripping down his face, the ridiculous spinning fist-pump dance move he did, the way he performed what might have been the longest bow in history  (seriously, a full minute down there), oh, and that wry-sounding flow delivery.

As Macklemore explained from the stage, he wanted the show to feel like we were all in his living room, no matter how many people were crammed into the space. Wednesday night, the Spokane Arena felt like an over-sized house party hosted by Macklemore and Lewis, albeit one with lots of exploding fire and falling confetti.
click to enlarge 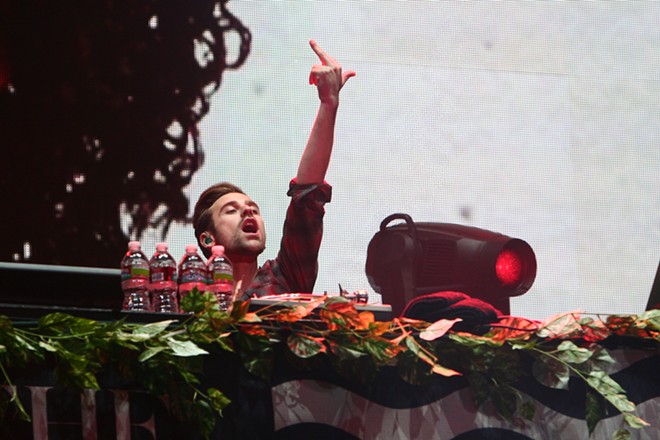 Chris Bovey
“I can’t tell you how good it feels to be home.”
click to enlarge 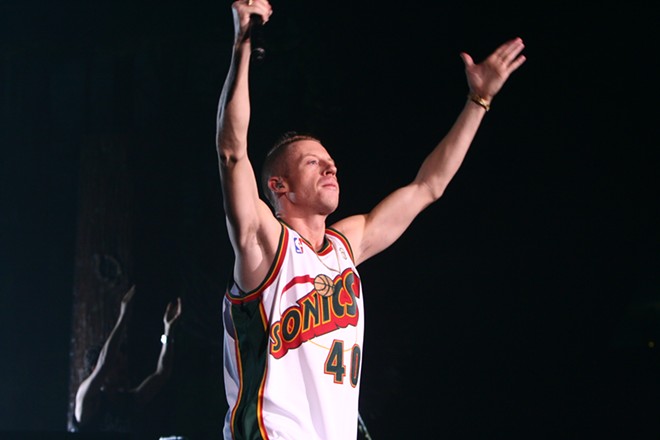 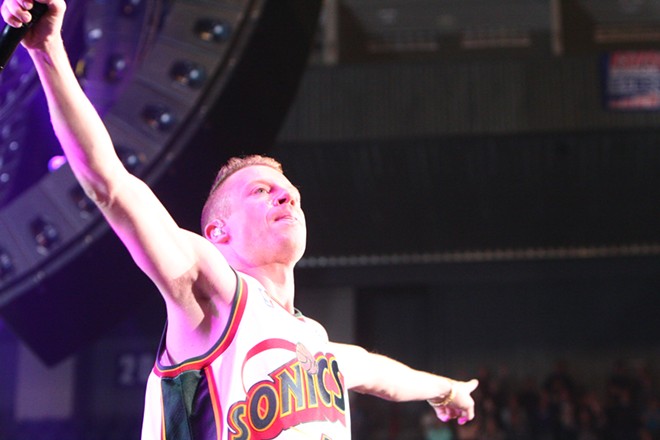 Chris Bovey
Macklemore plays for more than 8,000 people on Wednesday
click to enlarge 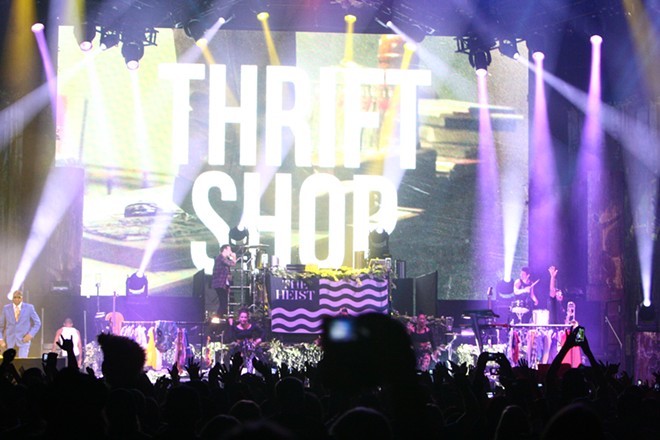 Keep your submissions coming for the 2013 Short Fiction Contest