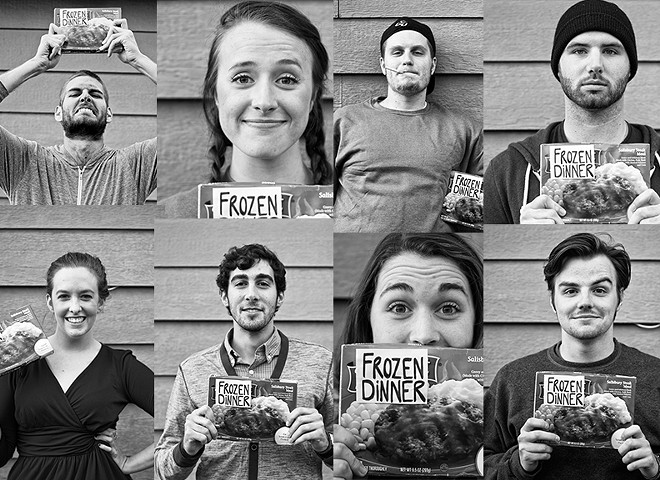 Jeff Rutherford is a busy guy. Not only does the Gonzaga senior, a creative writing major, have class and homework and eventually graduation taking up his limited time, added to that lately has been the chaos of producing and directing his debut play Frozen Dinner, premiering tonight.

Rutherford, a former Inlander intern and now occasional contributor, started developing his idea for the comedy-drama early this year, submitting it to the Gonzaga Department of Theatre and Dance for consideration as one of select student-written productions performed this year.

Without revealing too much of the storyline, performed by a cast of seven Gonzaga students, Rutherford says, “When I wrote it I was trying to capture a lot of truth in life. It’s really an absurd and silly play, but at the heart of it is a lot of things people feel and experience in life.”

The hourlong play takes a “slice-of-life” approach as it follows main character Joe through one evening in his kitchen, with the rest of the cast rotating in and out of the scene.

"I think I would say it tilts toward comedy, but one of the actors said he thinks it 'uses the absurd to teach a lesson.' It’s still emotional and dense in what it’s saying about people,” Rutherford explains.

Frozen Dinner is one of seven productions being showcased at Gonzaga during the current academic year, but it’s not Rutherford's first foray into producing original stage content. Earlier this fall, he led a new sketch comedy group called the Boone Street Hooligans, who’ve since had a warm reception locally and beyond. The student group recently performed in Seattle, and though Rutherford says its performances here have been inconsistent, there are plans to host more shows in the future. (Follow the group's Facebook page for upcoming show information.)

Admission to Frozen Dinner is a suggested $2 donation, which Rutherford says will be donated to the local nonprofit Cup of Cool Water, which supports homeless youth through outreach and ministry.

THIS WEEKEND IN MUSIC: Cozy tunes for a buck-up kind of weekend