U.S. Air Force officials will accept public comment this evening on the unlikely proposal to bring new KC-46A tankers, along with $292 million in construction spending and additional jobs, to Fairchild Air Force Base. While a Kansas base came out as the preferred option to house the fleet of 36 new tankers, Fairchild remains one of three alternative bases under consideration. 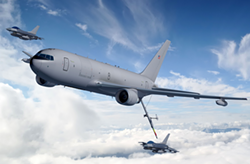 Air Force
The new KC-46A tanker
Air Force officials will make a presentation on the proposed project at 5:30 pm tonight at the Lincoln Center with public testimony opened up at about 6:15 pm. Doors open at 5 pm.

Officials hope to collect public feedback on the recently released draft Environmental Impact Statement that evaluates the scale and effects of housing the tankers at all four bases, including the top choice: McConnell Air Force Base.

I would recommend starting with the 70-page executive summary. The other 900-plus pages are broken into Volume I and Volume II.

If new tanker operations came to Fairchild, the draft EIS indicates the base's 30 KC-135s would be replaced with 36 KC-46As, resulting in a 62 percent increase in flight activity. The base's population would also increase by nearly 1,100 people, including 417 full-time military personnel and their dependents.

The draft statement estimates the project would result in about $292 million in construction spending to build new aircraft and operations facilities, creating approximately 3,020 jobs. They expected these jobs to come from work crews, engineering services, retail sales, food services and other related support industries.

The draft EIS also briefly hints at continuing discussion about the potential impacts of a proposed casino complex under development by the Spokane Tribe:

"The proposed West Plains Casino and Mixed-Use Development Project has the potential to combine with the KC-46A … scenario to result in both beneficial and potential adverse cumulative socioeconomic effects."

Overall, the report found no significant impacts to the surrounding environment, local safety risks, air quality or infrastructure. Officials expected some noise and traffic to increase during the construction phase.