Each week we print For Your Consideration, a feature where we take turns telling you about worthwhile stuff we’ve been reading, watching, listening to, etc. Now we’re starting a new web-only feature that’s kind of the inverse: Each week we have a single topic with recommendations from several Inlander staffers. Feel free to add your own in the comments. 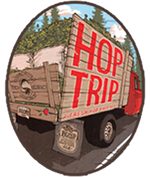 For the past two months, my household has been consuming almost only one beer — Deschutes Brewery’s Hop Trip. Why? Well, it might be the tastiest pale ale on the market and you can only get it a few months out of the year, and even then it’s hard to track down. Deschutes travels from its base in Bend, Ore., to outside of Salem every August, filling their trucks with fresh-from-the-vine hops (three different varieties) and brings them back to Bend where they are immediately dropped into the brew kettles four hours later. The result is a massively floral aroma and a crisp, bright taste. Time is running out on this beer, so here are some places around the area where you can find it on tap or in the bottle.

Real men drink white wine, and I love a good Pinot Gris, like the 2012 Erath I picked up for a dinner party last week. It's also a good bargain; well under $10 at Safeway. Casked in stainless steel, not oak, it's dry and more complex than you'd expect, with a mineral tone and bright, fruity notes of pear, melon, even apple and grapefruit. At 13.5 percent alcohol by volume, it's big (for a white). Not sweet but tart and crisp, it pairs perfectly with seafood; in this case, grilled scallops. All Erath does is Pinot — Gris, Noir and Blanc — producing consistently strong vintages in Oregon's Dundee Hills, a half-hour outside Portland, for more than 40 years. As with far more expensive Pinots from France's Alsace region, much of the credit goes to a distinctive terroir — here, it's red, volcanic soil rich with iron, higher exposure to sunshine and cooling marine breezes, and far less of the grape-chilling fog that collects lower in the Willamette Valley. 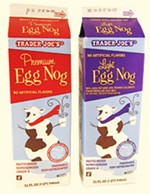 It’s the season of dark winter beers, and I’d typically be able to ramble about that for a while, but I’ve got a bit of a beer-writing hangover after just finishing a winter beer story for this week’s Snowlander. So, instead, I’ve been pleasantly surprised with the Trader Joe’s Egg Nog (especially with a little bourbon mixed in). It’s heresy to some people, I know, but typically I’m not that into egg nog. It’s just too syrupy and thick, like melted ice cream that would be much tastier as actual ice cream. But the Trader Joe’s variety is nicely spiced and avoids the pitfalls, possibly because it doesn’t contain the high-fructose corn syrup that’s one of the top ingredients listed on a lot of cartons.

The timing of my discovery of this beer may be a little off, but that’s not stopping me from drinking it even when the temperature is below freezing outside and most would prefer a warming, winter-style ale (more on that in a bit). Maybe I’m just late to the party, but the Leinenkugel’s Orange Shandy is seriously amazing if you’re a citrus-y beer-lover like me. Also if you’re fan of the brewery’s other shandy-style beers. Its easy drinkability and crisp flavor profile make it an easy beer to throw back (for all those on-the-fence beer people, I swear you’ll like this) pretty much whenever and with any type of food. According to the Wisconsin-based beermaker’s website, its Orange Shandy — what I’d also consider a “summer beer” — is available from September through February. If you’re looking for something a little toastier, I also recommend Leinenkugel’s Snowdrift Vanilla Porter, which is malty, warm, and has a smooth coffee/chocolate-y aftertaste.