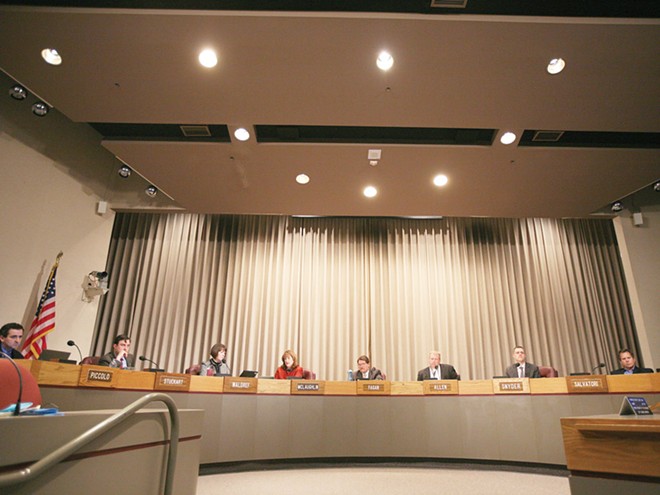 To the civically involved: bring snacks, stay hydrated, brace yourselves. It's going to be a long night at City Hall.

On the Spokane City Council's agenda tonight are two major policy decisions: the future of the Office of Police Ombudsman and a proposed extension of the city's sit-lie law. The meeting starts at 6 pm in council chambers at 808 W. Spokane Falls Blvd.

The ombudsman issue has been a long and complicated fight, with the mayor on a full-court press over the last two weeks to get citizens on his side. While some oversight advocates in town have called for an ombudsman who can open investigations outside of the police department's Internal Affairs process, the mayor has said he believes a citizen commission to oversee the ombudsman provides enough independence for successful and fair investigations of officer misconduct. Much more about what's in question here and here.

Local groups pushing for increased independence for the ombudsman have been rallying their troops to get letters and emails, plus bodies in council chambers, to call on council members to reject the mayor's proposal. They're planning to wear red and we can likely expect some sort of outburst or symbolic show of frustration if the council approves the contract agreement and ordinance in question.

The sit-lie change on the agenda would expand the city's law prohibiting sitting or lying on downtown sidewalks from the current prohibition during the hours between 7 am and 9 pm to those between 6 am and 1 am (in other words, reducing the time sitting or lying is legal from 10 hours to five). The ordinance change would also outlaw sitting on any "sidewalk fixture not designed primarily for the purpose of sitting." While supporters of the change say they hope to direct homeless people who may be sleeping on city sidewalks to services, opponents, including City Council President Ben Stuckart, say such restrictions effectively criminalize homelessness. Representatives from the Spokane Homeless Coalition have been working to organize emails and letters and are likely to show up en masse tonight. Supporters say the change, originally part of a slate of ordinances passed earlier this year, can help reduce nuisance or "quality of life" crimes in downtown, which fell in the media spotlight this summer after business complaints about homeless young people downtown.

Below is the council's full agenda for tonight, including the sit-lie ordinance (to jump to the ordinance language, click "ORD C35068" under "Final Reading Ordinance" on page 7 ), the tentative agreement with the police guild (click "OPR 2013-0864" under "Special Considerations" on page 7 ) and the ombudsman ordinance (click ORD C35069" on page 7).