How fuel gets to airplanes 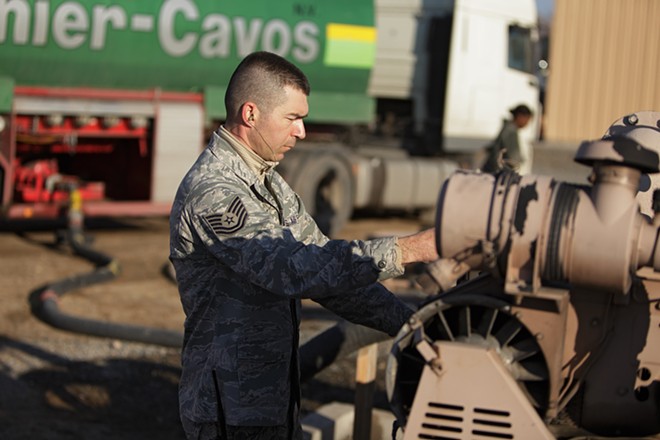 Technical Sergeant Nick Parrot starts an R-22 pumping unit to receive diesel from a Kyrgyz fuel delivery truck. The fuel will be pumped into a large bladder that sits beyond a berm in a large ditch. Once the pump starts up, he walks to the top of the berm to make sure the bladder is filling properly.

“We move a lot of people, from home downrange and back home again,” he says. “We move a lot of cargo to support the mission down range. We are a transit center supporting missions all over the world.”

Parrot and the other Petroleum, Oil and Lubricants (POL) of the 376th Expeditionary Logistics Readiness Squadron provide fuel for all the vehicles, tankers and airlift aircraft at the Transit Center at Manas. They accept fuel from local Kyrgyz sources, and drive on the flight line to fuel C17s, KC-135s and other aircraft at the transit center. “Fueling freedom” is how POL Airman First Class Jacob Merritt describes his job. They have about 3 months left in their deployment before they can return home to Fairchild Air Force Base.

According to transit center Vice-Commander Colonel John Vaughn, in FY 2013, 240 million pounds of fuel were used between tanker and airlift aircraft. This is to transport a daily 1,000-2,500 troops through the transit center and to refuel approximately 12,000 coalition aircraft mid-air over Afghanistan in the course of the year.

Greetings from Service Members Deployed at the Transit Center at Manas