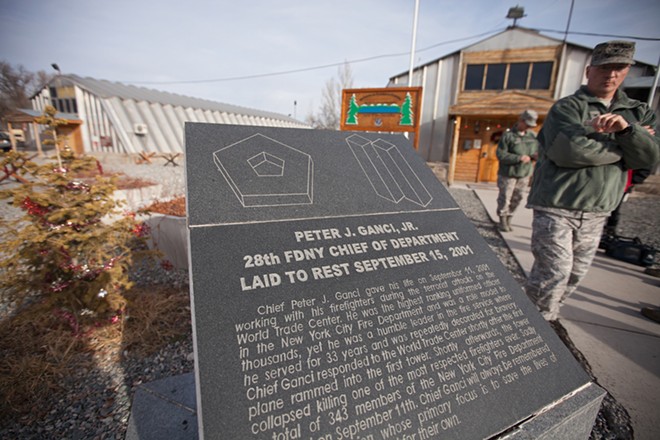 Young Kwak
Col. John Vaughn walks by a memorial dedicated to Peter Ganci Jr., the most senior New York City Fire Department officer who perished in the attacks on Sept. 11.

You can walk around the base in less than an hour. Unlike most sprawling domestic bases, the Transit Center at Manas, Kyrgyzstan, is relatively small. It is dotted by dormitories, other other permanent structures, tents and barricades. The one-way streets literally take minutes to drive. Gravel fills in most landscaping space. There is no grass.

A forested area just off base is rumored to be home to a snow leopard, which has not been verified through photos or video. An occasional Humvee patrols the streets. Buses line one interior street near the customs building passenger terminal, which serves as a temporary waiting area for incoming and outgoing troops. Manas processes 80-90 percent of all troops coming into and out of Afghanistan.

Home to the 376th Air Expeditionary Wing, Manas hosts KC-135s for aerial refueling and C-17s for personnel and cargo delivery in and out of Afghanistan. On June 20, 2013, the Kyrgyz parliament voted 91-5 to end the transit center lease agreement between the U.S. and Krygyzstan.

While the base may be small, building and maintaining the transit center’s infrastructure is a full-time job for Fairchild Air Force Base service members deployed to the 376th Expeditionary Civil Engineering Squadron, including Senior Airman Austin Brown, who maintains waters and fuel systems.

"We had a 6-inch water break, fixing drains, leaking pipes, bursting pipes," he says. "I've been helping out the structure shop. We do a lot of moving around as far as storage units, operating heavy equipment, which was fun."

The civil engineers, along with other Fairchild service members and two others with ties to Spokane have a large impact on the operations of the transit center. They are among the 1,400 personnel are currently deployed at Manas, along with 300 Department of Defense civilian employees and contractors. Manas also employs 700 Kyrgyz contractors. 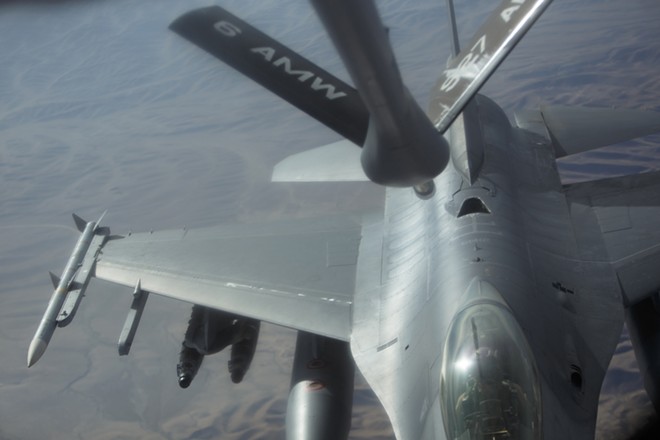 U.S. forces will leave by July 11, 2014. Romania has been selected for airlift operations, but the Air Force has remained tight-lipped about where the tankers will go, officially stating that they moving to an “undisclosed location in southwest Asia.”

According to transit center Vice Commander Col. John Vaughn, in fiscal year 2013 about 240 million pounds of fuel were used between aerial refueling tankers and airlift aircraft. The fuel was used to transport 1,000-2,500 troops daily through the transit center and to aerial refuel about 12,000 coalition aircraft over the year.

First Lt. Jacob Mueller, a KC-135 co-pilot during the first leg of a flight from Fairchild to Manas, spoke about being a pilot. The 25-year-old was headed to Manas on his first deployment. He said chose to be a tanker pilot because “I like being around people. I like the crew mentality and like having conversations.” They are also "on-the-road" less often than cargo pilots. While he was sad to leave his family during Christmas, he was anxious to get started on his deployment. I saw him a couple times more at Manas. He said he was planning missions but was hoping to fly soon.

I met a team of three crew chiefs from the 376th Aircraft Maintenance Squadron and 376th Expeditionary Operations Group air crew inspecting an alert status KC-135, one morning. Each day, an air crew and tanker must be ready to fly immediately. Senior Airman Frank Stevens said that the maintenance they do on the alert plane means “as soon as the air crew shows up, we can get engines running within 15 minutes.”

Two of three crew chiefs working on the alert status tanker were from Fairchild and spent quite a bit of time laughing during their interview. They joked about an air crew that once tried to take off without starting engines. 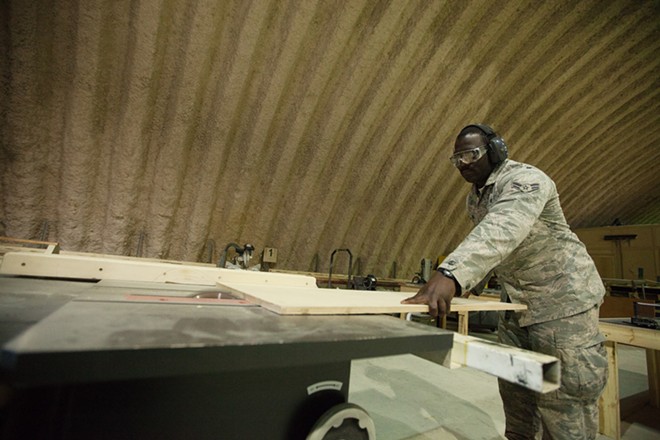 There were some first deployments, including 376th Expeditionary Civil Engineer Squadron Airman First Class Michael Mills. He spoke quite a bit about being involved in some of the local volunteer work that Manas personnel perform, saying, “We had a chance to go off base, go to the orphanages, speak to people, putting smiles on their faces. … It was nice talking to them, teaching them how to speak English, playing soccer and tennis with them.”

"We have done this year alone about 10 different humanitarian assistance projects worth roughly $2.2 million," Beaty says. "A typical project would be a renovation of a local village school, where we go in and replace the heating systems, boilers, radiators, windows, and help them have a better place to go to school and study.”

TSC also conducts social and cultural exchanges with local communities, conducts joint training with the host nation military and acts as a liaison between the United States and Kyrgyz government. 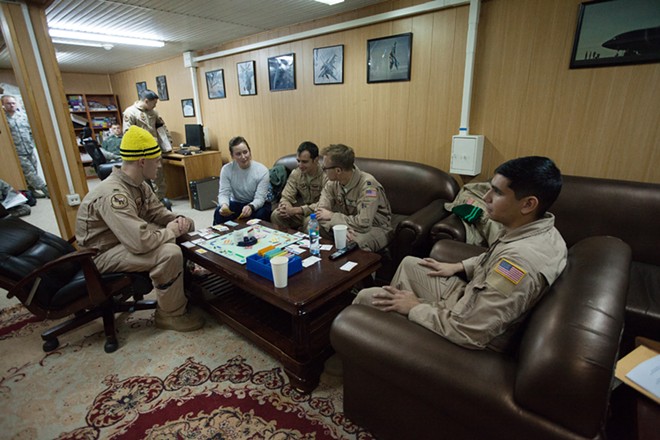 As one of three 376th Air Expeditionary Wing chaplains, Lieutenant Colonel David Beseler and his colleagues have a unique job. In addition to leading religious services, he counsels deployed personnel. “We each see an average of about six to ten people a day," he says. "We talk about their personal things and how things are going at home. We ask them about their family life and all those sort of questions. Basically, its just kind of helping them to know that there’s other people here (who can help).”

He spoke a lot about the difficulties of deployed personnel being away from family during the holidays. But, he says, “We pull together as a family … We have great meals here. We have a lot of festival kinds of things. Different concerts come in. There’s a lot to make them feel better while they’re away.”

At breakfast one morning, I spoke with U.S. Navy Reservist Lt. Commander Melissa Coombes, an Operations Officer and Assistant Officer in charge of U.S. Naval Forces Central Headquarters (NAVCENT HQ) Manas. Her unit takes care of and tracks Navy personnel flying in and out of Manas.

She said that the best part about Manas is “our family, our Navy family.” During our interview, she was pretty giddy about Navy beating Army 34-7 earlier in the morning. She stayed up to watch the game at 2 am Kyrgyzstan time. “We tend to make it fun and laugh a lot," she says. “But it is hard to be away (from home) and it wears on you after a while.”