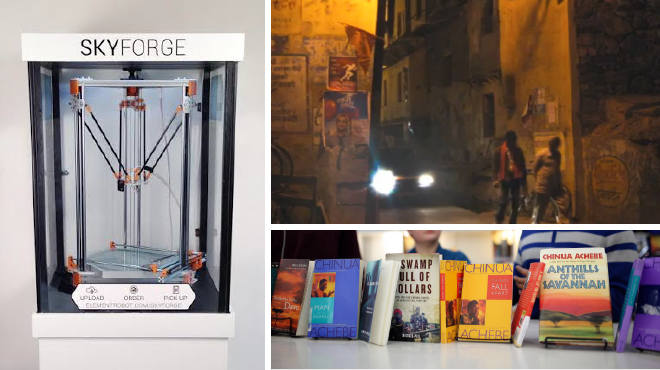 Clockwise from left: 3-D vending machine and the University of Idaho; one of the winning entries in Gonzaga's Worldview Photo Contest; Daily Evergreen photo of books donated to Pullman's public library.

Shades of Black: For the 11th year, U of I hosted the showcase of culture this past weekend. Originally a Black History Month showcase, it's evolved into a multicultural one and has expanded to other campuses in the Northwest. EWU hosts an annual Shades of Black show and WSU will host its first one this upcoming fall. (The Argonaut)

New film course: U of I alum Martin McGreevy is teaching a four-week course at the university and sharing his experiences working in the film industry in New York with film students. McGreevy says he plans to work on a short film in Idaho this summer. (The Argonaut)

3-D vending machine: There is now unlimited access to 3-D printing for the general public. (The Argonaut)

Cultural books: Members of the Nigerian Student Organization plan to donate works by influential Nigerian authors to the Neill Public Library because it doesn't have any Nigerian literature. (Daily Evergreen)

Selling the City: In this class, students work with the Pullman Historic Preservation Commission to update Pullman's downtown walking tour and design a brochure. The class will present their work at the end of the semester. (Daily Evergreen)

White Rose exhibit: An exhibit in the Terrell Library looks at a student group’s fight against Nazi Germany. “Die Weisse Rose: The White Rose” is a traveling exhibit that WSU is hosting until March 7. The exhibit lives permanently at the White Rose Foundation in Munich. (Daily Evergreen)