In February 1914, almost exactly a century ago, a young lineman named George S. Roberts was killed by a high-voltage wire while working in Lindsay, Calif., for the Mount Whitney Power and Electrical company. He left no letters or other documents to help authorities reach his next of kin. But he did leave a photograph of himself, sitting on a moon with a Spokane pennant on the backdrop.

Following publication, men who knew him personally said he’d previously lived in Kamiah, Idaho, and worked as a lineman in St. Maries for several years. They said his parents lived farther south in Idaho, around Lewiston; another acquaintance said they may have moved to Utah. His brother may have joined the Navy the previous year.

“From the picture in the Chronicle last night I am confident that the young man is the same person I knew at Kamiah two years ago,” J.H. Wilson told the Chronicle. “His name was George Roberts, but I am not sure as to the middle initial. At that time his father was running a hotel at Kamiah, and later the family moved to Lewiston.”

If the paper wrote about the family again, it does not come up in an archives search, and a search through census records didn't reveal any clear connection to a particular family.

But what of the strange photo? Paper moon postcards are well-known to antique postcard collectors, and were popular at fairs and carnivals between 1900 and 1940. Not much is known about where they originated, but it may have been an attraction at Coney Island, and at least one company still maintains the tradition today for the nostalgia factor. On Flickr and other sites, collectors have posted other Spokane pennant photos apparently taken at the same location: 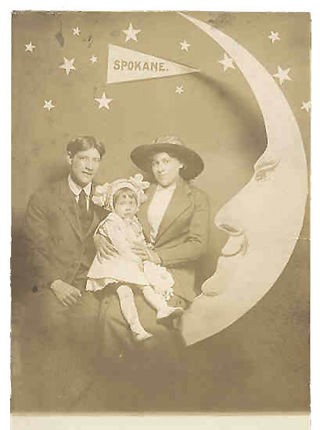 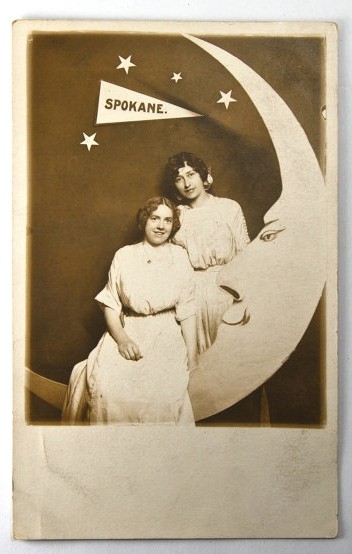 Here's more background on paper moon photos. Does anyone know more about these Spokane photos or where they were taken?