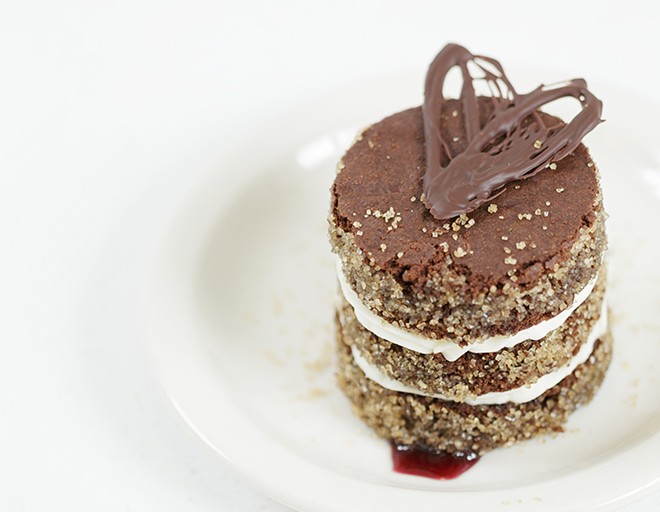 Young Kwak
A three-course meal at Stacks @ Steam Plant is $18, including the Stacks Chocolate Tower for dessert.

As a college student who’s only been temporarily transplanted to the area for a few weeks, I completely understand that all of our Restaurant Week coverage has probably made your eyes glaze over more than a few times. You’re not “real adults,” you don’t want to spend your money at these overpriced restaurants. But that’s not how you should think about it! It could actually be a great addition to one of your nights out this weekend. A wonderfully prepared three-course meal from a restaurant you’ve never tried before could be exactly what you need to spice things up a little — make your weekend just a little less mundane. And to be honest, I’ve spent more for myself at Pizza Hut than I did at one of these restaurants (just to put things in perspective). There are more than 70 participating restaurants this year, and more than a handful I’m sure you haven’t tried yet. I already know the excuses you’ll try to make, but they won’t work and here’s why.

If transportation is an issue:

I’ve been in Spokane for about two months now and have done a pretty good job — I’d like to think — of getting around here without a car. It’s pretty simple, and one of the greatest things about participating restaurants this year is that they’re all over. They’re in CDA, they’re in Liberty Lake, they’re in Post Falls. They’re everywhere basically, so getting to one shouldn’t be an issue. And if you go to Gonzaga, EWU or Whitworth, a bunch of the restaurants are right in your neighborhoods, if you’d rather not travel far.

If money is an issue:

Every restaurant participating in Restaurant Week has fixed prices. Your three-course meal will either cost $18 or $28 per person, unless you order a drink (and please don’t forget to tip). So if you’re trying to limit your spending, go for one of the restaurants offering the cheaper meal. Take a look at the menus and make a choice. It can be hard to choose just one, so I’d suggest picking one you’ve been dying to try out but always thought was a little pricey or one you know you love but don’t treat yourself to very often. I totally understand the budgetary issues, I’m a broke student, too. But that’s why your one choice is so important, because it could potentially be your only Restaurant Week experience until next year.

If you’re a vegetarian:

Being a vegetarian should definitely not be a deterrent. Here at the Inlander we have quite a few vegetarians on staff and they’ve enjoyed Restaurant Week just the same. And some of the restaurants that haven’t been exclusively classified as vegetarian offer some great vegetarian dishes too.

If making plans for the rest of your night is an issue:

So many of the restaurants are in the downtown area, and there is so much to do around there at night. Especially during the weekend. Get warmed up at one of the participating restaurants (some of them have drink specials, too) and head out to your favorite bar or club. It’s best to drink on a full stomach, anyway.

There are no other possible issues. There are no other excuses. Get up and enjoy the last few days of Restaurant Week. And don’t forget to share photos of your gorgeous looking food (yes, we’ll happily accept all your foodstagrams just this once) on Facebook, Twitter and Instagram. Tag #INRestWeek, so we can all see what you’re eating because, of course, that’s the best part.