We all have a soft spot for those heart-wrenching stories of a helpless animal being rescued and brought to a better place in life — it's just part of our human nature. It's why many of the Internet's most recognizable cats have become famous too. Besides being incredibly cute, many of these celebri-cats came from pasts fraught with hardship or a lack of compassion.
click to enlarge 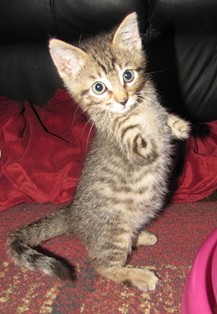 It's why kittens like Mercury and Frosty have emerged as viral stories of early 2014.

A terrible accident left Mercury with just two legs instead of four. Found when he was only a few days old, the kitten's front two legs had been severed in different places and he was missing all but one toe on a back leg. The family who took in the injured kitten to bottle feed and nurse back to health think he was the victim of a weed whacker accident.

Despite it all, Mercury defied the odds, which can be low for even a healthy bottle-raised kitten, let alone one that had sustained a life-altering injury in its first days of life. His rescuers, a family in Oklahoma City, have seen Mercury grow stronger every day, learning to move around on the two back limbs he has left. His chances of adapting to his condition were actually greater than if he had been a full-grown cat, because as Mercury grew, his rear leg muscles were able to gain more strength than a normal, four-legged cat. His owners report on his Facebook page that Mercury is able to play, climb stairs, jump, use a litter box and behave like an otherwise "normal" cat.

As Mercury's story has spread across the 'Net in the past several weeks, he's gained tens of thousands of followers on Facebook, bringing smiles to our faces with his story of overcoming adversity and loving life the whole way.

Though she's not gained nearly as much recognition as Mercury, this little kitten overcame some pretty rough odds, too. 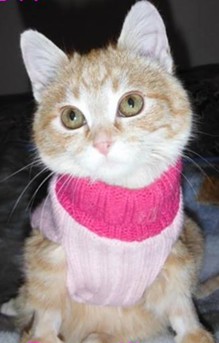 Frosty the Frozen Kitten Facebook page
Frosty's life started out grimly, but now she plays all day and wears cute pink sweaters.
It's been a harsh winter in the Midwest, and Frosty almost didn't make it through one of the deeper freezes that hit the region right before New Year's. The 10-week-old barn kitten was discovered near Sullivan, Wisc., nearly frozen to death. She barely made it through the first days of her rescue — dehydrated, malnourished and sick with pneumonia and a secondary infection.

It was touch and go through the first days and weeks, but Frosty has come back from it all, and so far seems to have recovered from her semi-death. Although her rescuer was criticized for trying to nurse the nearly-dead kitten back to health — she's had several other scares since her initial recovery, requiring emergency trips to the vet — her determination and will to live speaks for itself. And one look at the fluffy orange kitten wearing a little pink sweater, with her wide green eyes, is enough for anyone to fall in love with Frosty.

Frosty's owner has set up a Facebook page, Amazon wish list and a YouCaring fund to pay for her past and ongoing medical expenses.

Out for Inlander Restaurant Week: In Coeur d'Alene with Sammy Eubanks and Ellen Travolta