Rockin’ in the Free World? Why Neil Young should cancel his Tel Aviv tour date 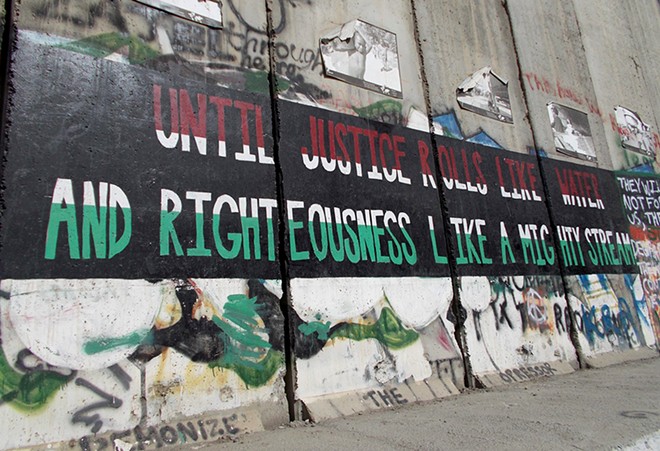 Taylor Weech
Graffiti on the separation wall in the West Bank links the civil rights movement and Palestinians' current struggle for equality.

When people ask how I became interested in politics and engaged in activism, sometimes I will give them the honest answer. It has less to do with studying American history and more to do with cutting class to listen to rock and roll, or whatever the kids are calling it these days. Lazy summers with Bob Marley, going on long runs with System of a Down keeping pace, or just spacing out with Radiohead, I was exposed to historical figures, political theory and a narrative that was left out of the limited humanities education I’d been receiving. Even a passing mention of a name or event that intrigued me had the power to repeat in my head, as all good pop music does, and prompt a quick online search. Those initial searches led me way down the rabbit hole of anti-authoritarian and people’s history, which led me on a search for the best things to do about the problems in the world.

The other question most people ask is, “Are your parents activists?” They are smart people, but they don’t have a history of political involvement. Luckily for me, though, they both have killer music taste and I was raised on iconoclasts like the Clash, the Talking Heads and, as a ’90s kid, all of the grunge staples. Some of my earliest memories center on driving around with my dad listening to the radio. Like any typical child, I had a lot of questions and he did a good job filling in the stories that certain songs talked about. I learned about Martin Luther King Jr.’s assassination from U2, a little about the IRA and Ireland from the Cranberries, and the story of the Kent State shootings from my dad’s all-time favorite recording artist, Neil Young.

Neil Young has a history of supporting rock and roll’s demand to question authority. He’s made cautionary tales about drug abuse less lame for decades, he points out the hypocrisy of Western visions of American expansion, and in recent years, he’s dedicated an entire tour to showing his solidarity with indigenous people resisting fossil fuel extraction in North America in his “Honour the Treaties” performances in Canada. All of these reasons seem to indicate that he’s not the type of artist to support apartheid and brutal military occupation, but his planned July tour date in Tel Aviv, Israel, indicates otherwise.

Pressure on Young from the international Boycott, Divestment and Sanctions (BDS) movement is sure to build in the coming weeks and months, as we’ve seen recently with Scarlett Johansson and Alicia Keys. Both of those performers chose to ignore the overwhelming demands to honor the call of Palestinian civil society (which is also supported by a growing number of Jewish Israelis) to support the cultural and academic boycott. Right now is an interesting time in this movement and part of me can understand Johansson, Keys and other academics’ and artists’ hesitancy, given the vicious attacks that open critics of Israel’s racist and violent policies are subject to, especially given their place in the public eye. It can be scary to do what’s right when it seems unpopular, but I think that they both underestimated how alone they are in supporting these policies. Alicia Keys snubbed a personal letter from Alice Walker, among millions of other requests, and Scarlett Johansson gave up her position with Oxfam as a humanitarian ambassador rather than say no to Sodastream.

The U.S. is the only country that continues to offer support to Israel’s ethnic cleansing and apartheid policies, and even that support appears to be slowly dwindling, despite a continued $3 billion annual bill in military aid, a greater amount than any other country receives from the U.S. by far. Only through persistent intimidation and fierce propaganda is the state able to convince Americans that Israel’s policies are necessary or morally acceptable. The fear of being labeled anti-Semitic has kept many public figures and regular people away from this issue, but once a person does research and examines their own good sense, the label loses its sting. I’ve been called an anti-Semite at least a dozen times online since posting about Neil Young and the BDS movement on Facebook yesterday, but it simply isn’t true. I am simply anti-oppression, anti-unfairness, and anti-militarism.

In Tel Aviv this May, I met with Jewish activists in Israel (along with many Palestinians in the West Bank) who made a passionate case for ending the unequal system that they live within. Some of the people who appear to benefit from this apartheid structure, Jewish Israelis, have realized that the benefit is an illusion, that a militaristic and fear-driven society can’t do anything positive for those on either so-called “side” of the equation. I am standing with those who are listening to people suffering in Palestine, Israel, and throughout the region as a result, and asking Neil Young to step down from his planned tour date in Tel Aviv. He will be in limited, but good, company. Stephen Hawking is probably the biggest name who has publicly honored the academic and cultural boycott so far. He said,

“I accepted the invitation to the Presidential Conference with the intention that this would not only allow me to express my opinion on the prospects for a peace settlement but also because it would allow me to lecture on the West Bank. However, I have received a number of emails from Palestinian academics. They are unanimous that I should respect the boycott. In view of this, I must withdraw from the conference. Had I attended, I would have stated my opinion that the policy of the present Israeli government is likely to lead to disaster.”

Neil Young has the respect of listeners around the world, and I suspect he’ll be rewarded for making the right choice. This is a campaign that has worked before, from the Montgomery bus boycott of the U.S. civil rights movement, to ending structural apartheid in South Africa. If cultural icons like Hawking and Young do the right thing, they can lead the way, creating a snowball effect of pressure from within and outside of Israel, doing their part to move toward a peaceful world. If Neil Young goes on to play in Tel Aviv this summer despite the mounting requests that he honor the boycott, I will probably never be able to listen to “Ohio” again. Something tells me that Palestinians and Israelis alike can relate to his words from the Vietnam era: “Gotta get down to it / Soldiers are cutting us down / Should have been done long ago.” ♦

Taylor Weech is a Spokane writer and photographer. She hosts a weekly public affairs show, Praxis, on KYRS-FM.