City steps in to help the Big Dipper 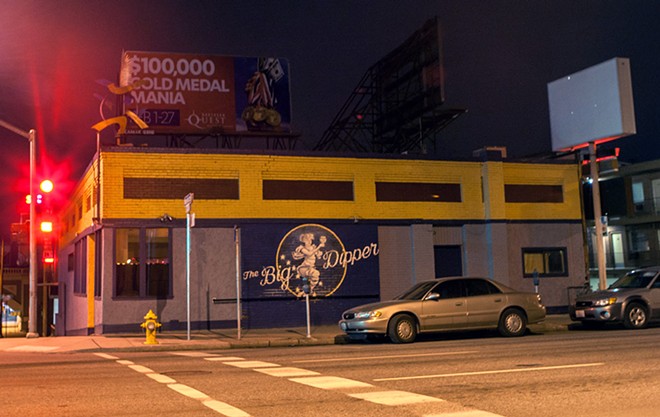 Meghan Kirk
The city is stepping in to help the Big Dipper install the fire sprinklers the venue needs to open at full capacity.

There are exactly two weeks left in the "Save the Big Dipper" Indiegogo campaign. Of a total goal of $50,000, just $4,800 has been raised in the last month and a half.

That's less than 10 percent, but Big Dipper owner Dan Hoerner isn't wringing his hands just yet. Because of a recent decision by the City of Spokane's Business and Development Services director Jan Quintrall, Hoerner has felt more like jumping for joy.

Quintrall has agreed to step in on behalf of the City to help the Big Dipper with its need to install a modern fire suppression system, the last big hurdle before the venue can offer larger-scale events that would quickly max out its current 110-person capacity. Having a suppression system would boost the Dipper's max capacity to more than 300.

Hoerner estimates nearly half of that $50,000 crowd-funding goal would have been used just to get a larger, modernized water line hooked up to the venue, a prerequisite for fire sprinklers to even be installed.

"The current water line into the building is just too antiquated and too small," he says. "To bring the venue into the 21st century requires a larger water line, which requires tapping into the main line under the road, which as you can guess is incredibly expensive."

Until recently, Hoerner was expecting that the Dipper would be responsible for that work.

"Between the city utility and developer services [departments] we decided that if we want to spur development, we need to help small and large business pay for getting that water line from the street to their building," Quintrall tells the Inlander. "The city is going to step up and do that."

Now, Hoerner is estimating the cost to install fire sprinklers at somewhere between $10,000-$15,000.

On the city's end, Quintrall estimates the bill to run a connection to the building from a 16-inch water main under Washington Street between $12,000-$15,000. That expense is to be covered by the city's utilities, economic development and street fund budgets. The city plans to begin the work once the Big Dipper submits a permit to install the sprinklers.

In a new era of relations between the city's development services and local businesses, the Big Dipper isn't the only one on the receiving end of the city's good graces.

Quintrall says the city is also offering to take care of similar work for a new restaurant going in at 912 W. Sprague, called the Tamarack Public House, whose owners hope to open in time for Hoopfest in late June.

"Empty buildings downtown don't do anybody any good — they're not on the tax rolls, generating sales or property tax, they're not creating vitality downtown, which lifts everybody's boats," Quintrall says. "Anything we can do to help get tenants and businesses in buildings is good for the whole city — it really wasn't a tough decision."

Calling all Spokane-area zombie extras for a new TV show