Lisa Waananen
The Wandering Table, next door to the Yards Bruncheon, is scheduled to open sometime in May.

Chicken fried garbanzo beans, applewood chicken wings, bacon-wrapped bacon sliders, peanut butter beignets… Here’s a peek at the tapas-style menu coming soon to the Wandering Table, scheduled to open in May in Kendall Yards. Above, you can see the construction progress has been moving along.

Unfortunately it's kind of a gray, rainy day, but here’s the Veraci Pizza building going up while we're at it: 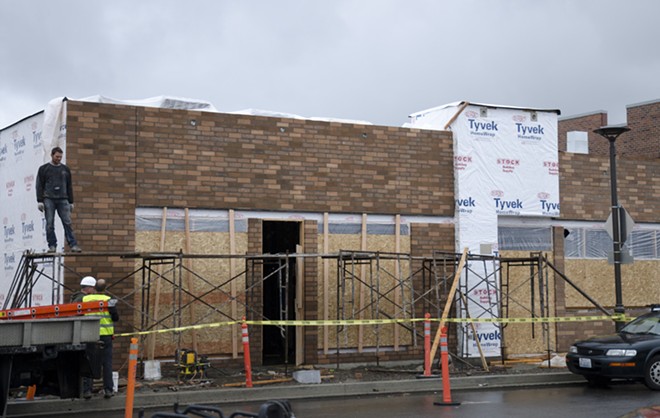 Lisa Waananen
Despite the rain, workers make progress on the new home for Veraci Pizza.

Fusion Flours, which is nearing the end of its Kickstarter campaign, is closing its shop this coming Monday with the goal of finding a new location soon.

The Bistro Box, the popular food truck, is opening the Fresh Plate — their brand for prepared sauces and spreads, and now a full fresh food market opening at Nevada and Empire this summer.

MickDuff’s Brewing Company started distributing their beer earlier this year as one phase of their expansion, and now they’ve announced their new tasting room will open at the beginning of July (in addition to keeping their original brewpub). The new tasting room is taking over the space currently home to Pend d’Oreille Winery, which is moving across the street to the historic Belwood building.

Also in Sandpoint, Litehouse Foods — maker of dressings, dips and cider — is buying a portion of the Coldwater Creek headquarters for its new offices.

A new place called the Jackson Street Bar & Grill is in the liquor licenses this week in North Spokane. The location was most recently Rumrunners, which closed to relocate at the end of January.

Some good news for Cody Winfrey, who we wrote about several weeks ago after his Disney-themed cocktails went viral — the whole time he was searching for a bartending job here in Spokane, and his week he landed one at Chairs Public House.

It’s probably not the only seasonal restaurant reopening soon, but Sweet Lou’s in Hope, Idaho, announced April 22 as this year’s opening day.

Ephata Café, Juice and Java is planning to open on Northwest Boulevard in June.

River City Brewing is tweaking its IPA lineup this year, and all IPA pints are just $2 through the end of the month. Also, happy birthday, Emily.

Also, we’ve got more info on two previously mentioned openings in the print issue this week: Mi Casa downtown and Wisconsinburger on the South Hill. Don’t miss my fun trivia about the Midwest, including the entirely true fact that in Wisconsin kids can sit and the bar and drink alcohol at any age as long as they’re with their parents. Another side note for authenticity: I worked at the food tent at the Minnesota State Fair one summer when I was about 15, at the frozen yogurt booth my friend’s family owned. People would come by and get genuinely upset at us for offering “health” food that didn’t involve anything fried.