Names suggested for the new plaza by City Hall 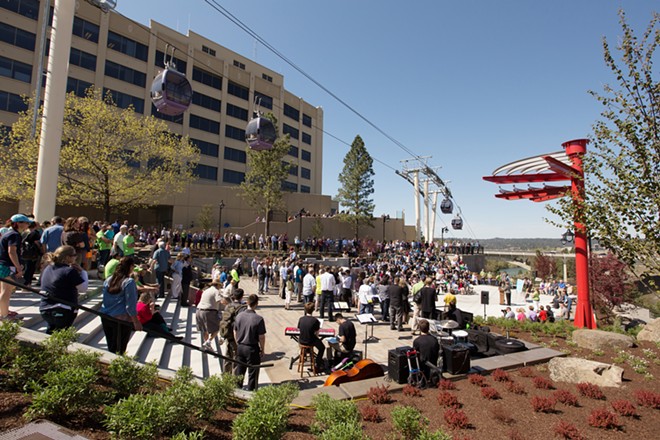 Young Kwak
A dedication at the plaza when Huntington park reopened on May 2.

The time for nominating a name for the new plaza in Huntington Park is now over. The suggested names are being reviewed now and will go to the Spokane City Council later this summer for a vote. So what might they pick?

If you missed it, the city was planning to name the plaza after James Glover, considered a founding father of Spokane. But some citizens objected since Glover has some not-so-honorable stuff in his history — mostly, that he divorced his wife, Susan, and had her sent to a mental hospital, either because she couldn’t bear children or because he wanted to marry someone else. (Or both.)

That planned was scrapped right before the renovated park opened to the public, and the city solicited new ideas through the end of May. As Shawn Vestal wrote in the Spokesman during the nomination time, some of the suggestions have been fairly obvious or generic — Liberty Plaza, Spokane Falls Plaza, etc. Here are some of the other ones:

This idea seemed to have the most support on social media and gained momentum with its own Facebook location. It honors writer and musician Isamu Jordan, known as Som, who died last year.

From a nomination comment from Erin Elizabeth Meenach: “Som was & is an amazingly influential, vivacious, kind, creative & compassionate Spokanite. He truly encompassed the very essence of what it was to be an involved member of the community, in addition to being a fantastic Father, loving husband, & the best friend you can imagine. His legend looms large & shall for many decades to come in the lives of his beautiful sons, & the hearts, minds & souls of our fair city.”

This suggestion from some members of the Friends of the Falls Association to honor of Dr. John Moyer, a former state senator, who they credit as critical person in opposing the Lincoln Street Bridge project that would have been built across the area now accessible from the plaza.

From the nomination letter: “Dr. John Moyer has made many contributions to the community over the years, in the exercise of his medical profession, in his service as a legislator, in support of preserving our historic structures, and in countless other efforts. It may be that his single greatest contribution was in reminding Spokane of the importance of our River and specifically the Spokane River Gorge.”

This suggestion honors King Cole, the force behind bringing the World’s Fair to Spokane. (The Friends of the Falls suggest he be honored elsewhere in the upcoming changes to Riverfront Park.) 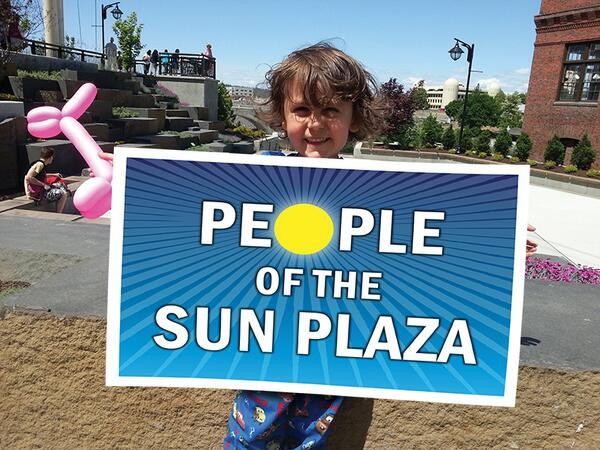 People of the Sun Plaza

This, or its variation, Children of the Sun Plaza, would honor the Spokane Tribe and native people who gathered at the falls for thousands of years. A more specific version of this, Seepays Perch or Seepays Point, was submitted by professor and historian Bill Stimson to use the Salish word for “chief of the waters.”

This one was suggested by Bart Mihailovich, best known as the Spokane Riverkeeper, to honor actor and comedian Michael Winslow, who was born in Spokane and grew up around Fairchild Air Force Base.

From the post on Instagram: “He's a one-of-a-kind actor and comedian, the man of 10,000 noises and #Spokane's greatest native son. I cant wait to see his name on a plaque.”