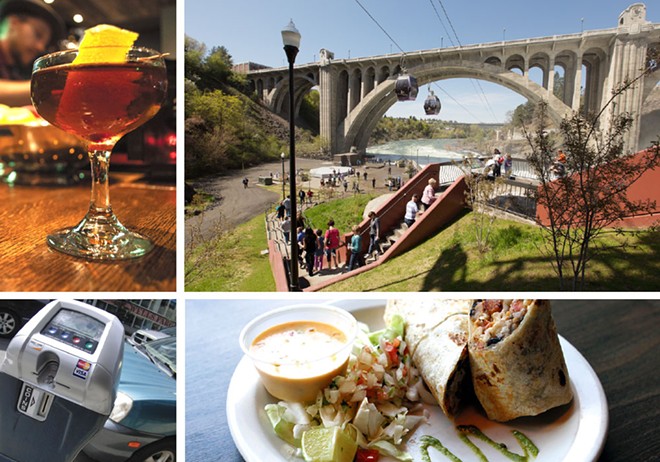 When downtown Spokane’s streets transformed into basketball courts last year, the Inlander was still located in the Hutton building on Washington Street. That reminded us just how much has changed in the past year, so here are some of the highlights you’ll notice this weekend if you haven’t walked Spokane's downtown streets since last year’s Hoopfest.

1. Huntington Park and the Centennial Trail

The newly renovated Huntington Park has only been open a month, but it connects with Riverfront Park so seamlessly that visitors could easily think they remember it being that way forever. The overlook on the south side of the falls is owned by Avista, and late last summer the power company closed off the whole area for renovations that include better access, art installations and more informational signs about the area. The most visible difference is the plaza by City Hall, right across Post Street from Riverfront Park, which is still in the process of getting a name.

About the time the park closed for renovations, the Centennial Trail opened on the north side of the river through the new Kendall Yards neighborhood, including an underpass beneath the Monroe Street Bridge. Stick to the right side of the path under the bridge, where the roar of the falls makes it hard to hear approaching bicycles.

2. Those walls by the Convention Center and other construction

It’s hard to miss the massive construction project near the Convention Center, which has been closing lanes and sidewalks all year. The former parking lot first became a giant hole in the ground, and is now beginning to take shape as a giant hotel. It’s a project of Walt Worthy, who also owns the Davenport, and it’s planned to open next summer as a modern hotel with more thant 700 rooms and a direct connection to the Convention Center.

That’s not the only construction downtown, though — nearby on Main Avenue the historic Bennett Block is under renovation. Former Bennett Block tenant Spokane Exercise Equipment moved a block to the east, which is also a hub for big renovations after two longtime businesses — Huppin’s and Dutch’s — closed last year. Madeleine’s will be moving there, and the owners are also opening another place called Durkin’s Liquor Bar.

Farther down on Main, the former Merlyn’s (which moved next door) is under construction to become a new market-style building with a brewery, bakery and other businesses. And up on Sprague near the Davenport, the historic Germond Building is also being renovated for apartments upstairs and retail at street level.

Since the Inlander moved out of the Hutton Building, the lower floors have been renovated to become the downtown hub for STCU, and the upper floors are under construction. Ground floor tenant Sweet Frostings Blissful Bakeshop is doing its own expansion and renovation right now, but remains open through construction.

After talking about it for a while and researching the best systems, Spokane finally got “smart meters” that let you pay for street parking with a credit card. This is great if you don’t have pocketfuls of loose change on you, but note that paying with card means there’s a minimum payment of $1.20 (an hour). The smart meters are concentrated near the center of downtown. The city has also been adjusting the time limits at some meters around the fringes of downtown, so don’t be surprised if that old 10-hour meter is now labeled 4-hour or “All Day.”

4. A smaller visitor center in the mall

If you try to stop by the old visitor center at the corner of Main and Browne, you’ll find an empty building. Late last year, Visit Spokane decided to forgo the permanent center in favor of more flexible outreach. In other words, if it’s traditional brochures and advice you’re looking for, stop by the Visit Spokane welcome kiosk on the ground floor of River Park Square.

5. Ramen, brunch and other new eats

We do our best to keep track, but the downtown restaurant scene has been crazy with openings (and closings and reopenings) in the past year. Entirely new is Nudo, a ramen house where Berg’s Shoes was located for many decades. Pho City opened right around Hoopfest last year, and Wild Dawgs reopened with new owners next door later in the year. Ciao Mambo closed and reopened as a MacKenzie River location, and Mi Casa recently opened near the Plaza in the former Rex’s Burgers space. It’s maybe best known for its bar, but Borracho Tacos & Tequileria opens early for breakfast burritos and, recently, all the World Cup games.

On the other side of the river, Kendall Yards had only Central Food at this time last year. Now there’s the Yards Bruncheon and the Wandering Table, plus Brain Freeze Creamery. Nearby, Irish pub and restaurant Knockaderry opened in the former Sidebar location by the courthouse.

A lot of new breweries, distilleries and nightlife spots have been popping up beyond the downtown core, but there’s plenty new to sip downtown. Last July, the venerable Blue Spark shut its doors and the space was quiet for a while, but about a month ago the space reopened as a new bar, Underground 15. Downtown Spokane’s first cidery, Liberty Ciderworks, opened its tasting room in April, and Walla Walla-based winery Patit Creek Cellars opened a tasting room on Sprague.

For cocktails, the Blind Buck opened in a speakeasy-style space next to the still-empty Globe late last summer, and the Volstead Act opened with vintage-style cocktails not long after. Santé also added a bar to its restaurant space, called the Butcher Bar. After opening the brewery side of things early last year, River City Brewing added a taproom in the fall — and, since it’s kid-friendly, they also serve a housemade root beer. If you don’t have time to catch a show at the Bartlett, you can stop by the music venue’s small cafe for coffee or happy hour.

THIS WEEKEND IN MUSIC: The sounds of Hoopfest, Paradiso