Big news today from the local arts community. The founders of Terrain — the annual, one-night juried arts showcase that's become increasingly popular since its inception seven years ago — announced an upcoming campaign to raise funds and support for a permanent, downtown visual arts and performance space.

This morning we chatted with Terrain co-founder Luke Baumgarten, a former Inlander staffer and current contributor, as well as the new interim director of Spokane Arts, to get the full rundown on the announcement and to find out what the community can look forward to in the coming months and beyond.

Changes are being set in motion starting with Terrain 7's new location this year. Scheduled for Friday, Oct. 3, from 5 pm-2 am, the showcase is being hosted at the nonprofit's envisioned new home, the old Washington Cracker Co. building at 304 W. Pacific. The brick structure is most recognizable by it's trapezoidal-shaped facade overlooking the Intermodal Center, advertising its past fame as "Home of Snowflake Saltines." 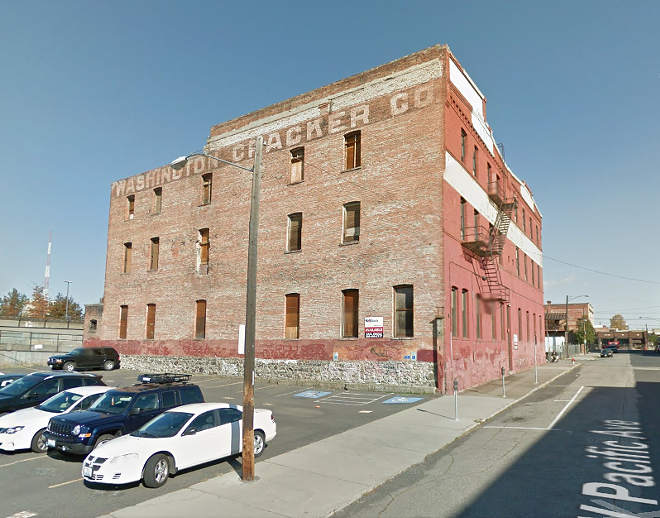 Google Street View of the building's east-facing side.

It makes sense that Terrain is ready to settle into a new, permanent home after years staging the event in the old Music City Building on West First Avenue, which was fraught with occupancy restrictions due to a lack of fire sprinklers. Baumgarten says the new venue, originally constructed in 1891, is already equipped with sprinklers that are up to code. It won't be known how many more people the space can hold, though, until they get a new occupancy permit, he adds. The building is also estimated to be at least one-and-a-half times bigger than the Music City space.

Terrain's co-founders' goal is to raise $160,000 through several fundraising methods to turn the venue into a year-round arts and performance space. That campaign is set to officially kick off at Terrain 7's artist reception, the day before the free, public show. Founders are looking to reach their goal through grant writing, a Kickstarter campaign, private donations and venue rental sales.

"We have been talking about this for a long time, at least three to four years," Baumgarten says. "We really spent a good chunk of last year trying to make the Music City space work, but the amount of money we needed was significant. Just putting sprinklers in that building alone would have tripled the cost we have now."

The current endeavor wouldn't be possible at the currently-estimated cost if not for the support of building owners', Mark Camp and Darby McKee, Baumgarten adds.

"It’s a beautiful space and a big space — it’ll feel like Terrain, hopefully just year round."

Visit the Campaign for Terrain site to sign up to receive future announcements about the project, including the official fundraising launch and other related news and events.

OUTLANDER: Wilderness Act at 50, elk habitat and a year off social media