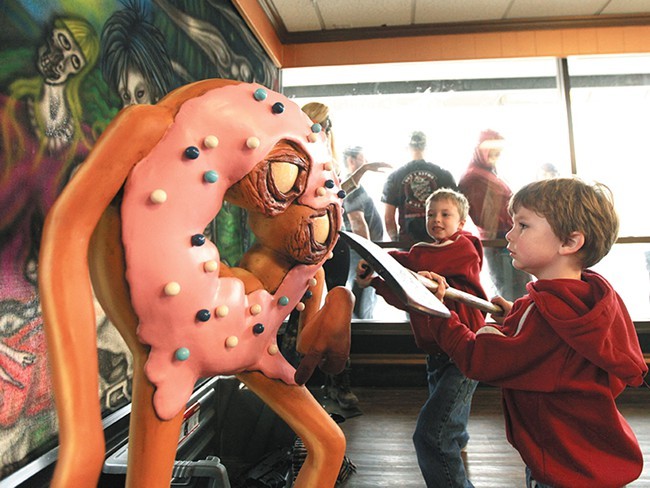 Within an hour after announcing an impending, permanent closure on its Facebook page, more than 80 customers and fans of Dawn of the Donut had shared their surprise and began mourning its departure.

The short-lived, zombie-themed donut shop — which served eclectically-named and unusually-topped pastries reminiscent of Portland's Voodoo Doughnuts — near the crest of the North Division Street hill was in business a little more than a year. Dawn of the Donut's last day of business is Sunday, Sept. 14.

While many commenters shared their sorrow over its short lifespan, others lamented the shop's mornings-only hours, saying that made it difficult to patronize.

Owner Martin Judnich, an attorney who lives in Missoula, tells the Inlander his choice to close the business was not for financial reasons, but rather a personal choice that was largely due to the challenges of being a long-distance business owner.

"It's basically just time," Judnich says of the decision. "We have had our difficulties and ups and downs all year, and I had a hard time spending time at the shop."

He adds that he's working with a broker to potentially sell the business, but no deals have arisen yet. Dawn of the Donut's mobile unit — a white truck covered in red paint handprint streaks — which often set up shop downtown during the evenings, is also ceasing to operate with the storefront, Judnich confirms.

Dawn of the Donut assistant manager Nikki Roberts was just as surprised as the shop's fans to learn of its end. She says two days ago, the business's 12-person staff was heading into a meeting to plan for fall and winter, but instead of that, they were informed of the closure.

"I am extremely surprised," Roberts says. "We're all very disappointed. We have to find new jobs now, and we had big plans. We just made a deal to work at the haunted maze in Hauser [Idaho], and some fall zombie hikes around town. We had big plans, and it turned out to be totally unexpected."

Roberts encourages anyone with a Groupon for the shop to come in and use it before the closing date on Sept. 14.

UPDATE: Almost a week after this posting, the business posted the following update on their Facebook page, around 10 am on Thur, Sept. 11:

"Good news Spokane! It appears that the process has been started for new ownership of Dawn of the Donut and we can keep our doors open and donuts coming. So, we will be staying open past this weekend, and we will be moving toward bigger and betting things very soon. Thank you all for your wonderful support. We will keep you posted."