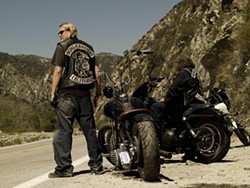 There was a time when Sons of Anarchy, the gritty biker gang drama, flirted with greatness.

But today, with its 7th and final season premiering next Tuesday, that greatness is a distant memory. Instead, the most enjoyable thing lately about Sons of Anarchy is unpacking its succession of flaws: The dry exposition. The boring lead. The lackluster action scenes. The tendency to change the status quo far, far too late. Everything having to do with Ireland.

But lately,  there’s been another problem, one once practically unheard of on television: Even at 42 minutes, Sons of Anarchy could be a slog. And yet, it often insisted on stretching that slog out even further. Nearly every single episode is supersized, running far beyond the typical TV drama running time.

Two of the 13 episodes in Season 5 were an hour long, and an additional three stretched 46 minutes or longer. In Season 6, the problem was even worse: The shortest episode was 52 minutes, and nine of them topped an hour. That meant more time for dreary musical montages, more check-ins with every tertiary character, more repetitive conversations where characters state their motivations and frustrations outright.

The supersized TV episode used to be a rare phenomenon, a gift for fans saved for series finales or holiday specials. But lately, networks like FX have given their show-runners far more free reign to experiment. And in the same way word counts no longer apply to the infinite expanses of the internet, Netflix has given writers opportunity to bust through length restrictions at their whims.

But just because an article can be 10,000 words doesn’t mean it should be. Remember the hour-long episodes of The Office, bloated and dull? Or the interminable early episodes of the Netflix-season of Arrested Development?

Or consider BBC’s Sherlock’s, where the extra-long episodes are just an excuse to meander down fitfully amusing rabbit trails or stage zany slapstick scenes with bouncy music.

Sherlock is not exactly CSI: Baker Street, but the extra length doesn't improve the show. Instead, it just contributes to lumpy, unevenly constructed episodes.

Sherlock frames one episode’s mystery nearly entirely through a boorish wedding toast given by Sherlock Holmes to dear Watson. The central conceit is that of course Sherlock would hijack a toast to make it about him. Then, in an attempt at sentimentality, Sherlock explains it is precisely the fact that Watson tolerates someone like Sherlock as a friend that makes Watson a wonderful human being.

Except, the sheer length of the episode drags the toast, and the story it frames, out to a length where Sherlock goes from lovably socially awkward to downright sociopathic at his best friend's wedding.

Granted, 90 minutes is positively sleek by movie standards. Yet television typically has different demands for its narrative structure than a movie. TV’s domain, particularly serialized TV like Sons of Anarchy, is the long, fat middle of stories.

TV writers have trained for the three-act half-hour sitcom and the five-or-four-act drama –  give them more minutes and that structure may suddenly not apply. Supersizing an episode is like asking an 800-meter track star to take up the steeplechase: You expect them to occasionally stumble and get winded. It doesn’t mean they can’t do a fine job. But it’s not their specialty.

The secret, I think, to pulling off a longer episode, is not necessarily through a higher quantity of scenes or an increase in subplots, but through longer, more focused scenes. Many shows flit back and forth between characters, through two minute or three minute check-ins. But often the best moments are when the shows allow themselves to truly slow down, to savor the moment. Witness one of my favorite scenes of Game of Thrones this year, where Oberyn Martell, who hates the Lannister family like few others, promises to risk his life to defend Tyrion Lannister. It’s a moment that could easily have been shorter or faster-paced or told through flashbacks, but it resists that urge, focuses on the quiet and the character.

Supersized episodes, theoretically, could be used for more of these scenes. (Game of Thrones certainly benefits whenever it focuses.) Shows could use their extra running time to go deeper instead of broader or more redundant. In Treatment, the innovative HBO drama set almost entirely in therapy sessions, thrives with the slightly longer episode lengths. And that drama typically only consisted of one 30-minute scene per episode, with only two people talking.

The trick is having the interesting characters, motivations, and stories to fill those longer scenes. The fact that Sons of Anarchy often doesn’t have those – well, that’s a bigger problem entirely.