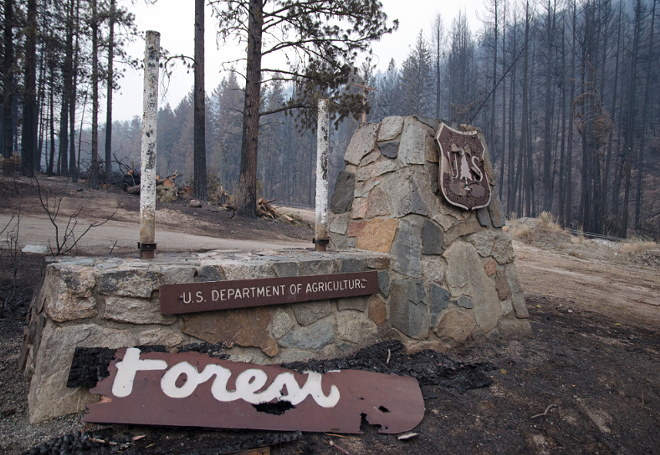 Jacob Jones
A sign for the Okanogan National Forest lies burned after the Carlton Complex fire moved through. Officials say hunting and fishing in the area still looks promising.

Wolves continue to draw attention after officials link a new pack, the Profanity Pack, to livestock kills in Ferry County. Over in Idaho, Ketchum city officials have called for a nonlethal approach to local wolf management. (S-R)

Environmental advocates have been quick to voice concerns after a BNSF train suffered a fuel leak near the Columbia River. (DOE)

The WDFW Commission also plans to take public comment on game management and rules for sportfishing in the Columbia River Basin through Oct. 16. (WDFW)

If you still haven't commented enough, the state Department of Ecology this week released proposed instream flow limits for the Spokane River to protect fish, wildlife and recreation. Officials will also be taking public comment until Nov. 7.

The Tacoma newspaper offers a long list of roadside wonders for people traveling to the Palouse for WSU football games and other roadtrips. (TNT)

The Idaho Department of Fish & Game reminds hunters and anglers they must stop at check stations for wildlife data surveys. (IDFG)

New York Magazine takes a critical look at how "Young Men and Fire" changed how America views wildfire. The last survivor of the Mann Gulch fire died in Spokane in May. (NYMag)

A USDA feature explores the definition of "wilderness" on the Olympic Peninsula. (USDA)

It's all about the little victories. Officials today declared the Delmarva fox squirrel recovered. (USFWS)

For fun: During a recent flyfishing outing near Hangman Creek, I captured mediocre video of a porcupine casually crossing the footbridge and a fish putting up a solid fight. (Instagram)