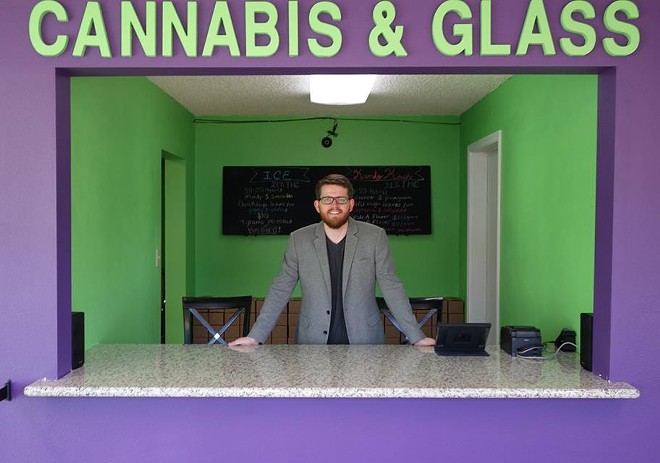 Spokane’s newest pot store opened today: Cannabis & Glass is at 6620 N. Market St., Suite 100, and will be open Monday-Saturday from 9 am to 7 pm. In the wash of brightly lit, sparsely decorated rooms selling weed across the city, this one — run by a pair of 20-somethings — is trying to catch your eye.

“Some of these stores feel so clinical to me,” says 22-year-old Cristy Aranguiz, a former KHQ reporter who is helping her fiancé, 26-year-old Tate Kapple, with the store. (Kapple won the retail license this spring and Aranguiz says they’ve confirmed with the Liquor Control Board that he’s the youngest recreational store owner licensed so far.) “We’re obviously super professional and polished … but we wanted to come across as fun because marijuana is supposed to be fun. That’s why you buy it.”

There’s something else unique here.

“We want you to try it with a fresh pipe every time,” Aranguiz says.

Cannabis & Glass sells pre-rolled joints, but other than that, if you want bud you get a pipe, too. The shop is calling these “bud boxes.” They come with your selected amount of pot (from one to five grams), a pipe or bubbler (depending on how much you’re spending), a grinder, a lighter and a sample of hemp wick.

You’ll find these in two strains today — both from Greentree Industries, a separately owned grow house in the same building as the store — and as many as 60 different strains in coming weeks leading up to Black Friday. Aranguiz says that’s the day they’ll really throw the doors open.

“This is the first holiday season when you can go ahead and buy marijuana for your friends and family,” she says, “and what better way to do that?”

Keep up with Cannabis & Glass and find out more about their specific offerings on their Facebook page here.

The latest Liquor Control Board numbers show Washington's recreational pot stores have sold about $36.5 million of product, raking in $9 million in taxes. Of the days in November so far, Election Day was among the top for sales at just over $754,500. A celebration of the two years since I-502 passed, perhaps?

A student at Seattle University tells KOMO she was suspended after making pot brownies for medical marijuana patients.

Pot shop licensees in Bellevue are suing the city over its rule that prevents stores from being within 1,000 feet from each other, reports the Seattle Times.

It's been rumored that Alison Holcomb, the chief author of I-502, was going to run for Seattle City Council next year, but instead she's taking on a nationwide ACLU effort to reduce mass incarceration. (The Stranger)

In light of Oregon's vote last week to legalize recreational pot, the Multnomah County district attorney says he'll drop 50 pending pot cases where the alleged crime would have been legal under the new law, reports the Oregonian.

In New York City, people caught with small amounts of weed may get a court summons and fined rather than misdemeanor charges and jail time, marking a significant policy shift. (AP)

Is all that blazin' shrinking your brain? Probably, say some researchers. Although, as the Los Angeles Times puts it, "the authors of the study acknowledge that they cannot discern whether a pot smoker's smaller orbital frontal cortex is the cause or the result of chronic marijuana use." So, maybe, but maybe not.

The New York Times profiled one of The Cannabist's pot critics over the weekend. "I think people underestimate cannabis,” Jake Browne told the Times. "You wouldn’t walk into a restaurant and say, ‘I’ll have the wine.’ So why would you assume people would do that for cannabis? In the same way that pinot grigio and pinot noir may sound similar but are completely different, names like Lemon OG and Lemon Skunk are very different strains with very different flavor components and completely different highs."

Just 10 days left in 2014 Short Fiction Contest, so send us your stories