FRIDAY
One singer-songwriter performing on stage can be quite inspiring. But why not add two more musicians, a spoken-word poet and a visual artist to that performance stage? The Round, a new-to-Spokane collaborative art series, does just that. Already, Rounds have taken place in Portland, Seattle, Tacoma and Anacortes. Last month, the Bartlett hosted the first one in Spokane. Tonight, the performance-art event features local musicians Duke Hogue and Hannah Reader, along with Galen Disston from the awesome Seattle soul-rock act Pickwick. Kurt Olson performs his poetry and Tiffany Patterson’s drawings will thrill. The show starts at 8 pm and is $8.

Elvis lives on. He’s not alive per say, but in the form of Spokane-native Ben “Preslee” Klein and his band the Rockabillies it’s almost like he’s here in the flesh. The tribute act plays a benefit show for the Harvest Food Bank. Bring canned food items for donation. Just Plain Darin is the opener for the $20 show that begins at 7:30 pm at the Service Station. Read our 2012 cover story on Klein here.

SATURDAY
Mootsy’s has a show Saturday night and we couldn’t be happier. The traditional Spokane music venue hasn’t hosted too many music events to speak of lately. Saturday, they have Seattle crazed-out rockers Communist Eyes (which features members of the Derelicts), the Blowouts and the Tri-City-based RedVolt. Check it out starting at 9 pm for $5. Be sure to grab a PBR.

Katelyn and Laurie Shook, their long blonde hair and big golden egg are back in Spokane Saturday. The Sandpoint natives now call Portland home but they still make time to hit up the Inland Northwest. The Shook Twins play their brand of eccentric fold at the Bartlett at 8 pm for $15. Josh Hedlund opens.

She calls her music neo-traditionalist synth folk-pop, but mostly Tristen gives off a big Tegan and Sara vibe with a dash of '80s pop. The Nashville-based singer-songwriter hits up the Big Dipper Saturday. Local acts Sea Giant, Bandit Train and Quinell open the show, which is $10 the day of.

Last October, we interviewed Gwar’s lead singer Dave “Oderus Urungus” Brockie, previewing his then-upcoming Knitting Factory show. In March, Brockie died of a heroin overdose, leaving his theatrical thrash-metal act without any of their founding members. The band, around since 1982, decided to continue on without their fearless leader, as they forged on in 2011 after guitarist Cory “Flattus Maximus” Smoot was found dead on their tour bus. Of that event, Brockie told us this: "I'm not going to lie and say it wasn't difficult, we miss [Cory] every day. But there would have been a worldwide outbreak of fury if we didn't continue." This weekend, the resilient band brings its ferocious stage show — watch out for flying fluids — through the Knitting Factory once more. After all, no one wants a worldwide outbreak of fury. The all-ages show is $20 and begins at 8 pm.

MONDAY
The Bob Curnow Big Band plays Monday night at the Big Dipper; the last time before they resume in February. This isn’t some Glenn Miller knock-off act; every song played by the group was transcribed, arranged, produced or composed by Curnow. The group’s take on Radiohead — a band majorly influenced by jazz music, believe it or not — is especially exciting. Jazz legend Curnow had a major influence on Spokane rocker Myles Kennedy and the band also features Cameron "Sparky" LaPlante, a member of the local hip-hop act Flying Spiders, on saxophone.

Basketball for Breakfast: A report from the nation's first college hoops game at EWU and some Zags notes 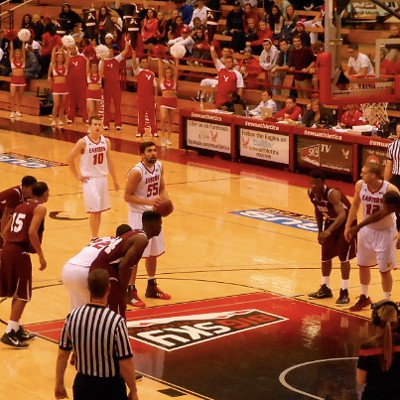