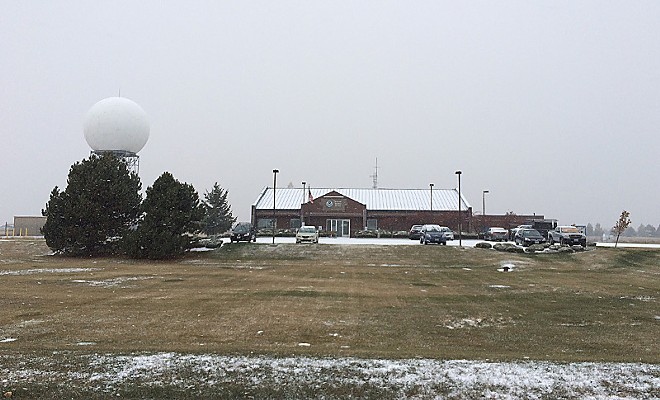 Jacob Jones
A first dusting of snow falls on the National Weather Service station west of Spokane this morning.

OUTLANDER serves as a weekly round up of Inland Northwest outdoor recreation and natural resources news. This feature will highlight a wide variety of issues and events, ranging from camping stories to national environmental disputes. We’ll also try to include some scenic photos. Feel free to pass along suggestions or curiosities that celebrate the Great Outdoors.

Just a week short of Thanksgiving, Spokane finally gets its first dusting of snow for the season. Check out Snowlander for information on local ski resorts and other inspiration for making the most of it.

In related news, the state parks commission this morning approved a ski area expansion at Mt. Spokane that drew sharp opposition from local conservationists. (KHQ) Who spoke against it last night. (KXLY)

Also, some quick tips for getting your skis in shape for the season. (Outside)

Moving on from winter sports, wildlife officials ask for misdemeanor charges in the killing of a wolf in Whitman County. (NWSportsman)

Check out a new recreation plan for the Snoqualmie Pass area and offer feedback by Dec. 19. (DNR)

Washington-based research shows stormwater can kill salmon in a matter of hours. (AP)

So maybe consider going out to clean up along the Spokane River this Saturday with Gonzaga. (Riverkeeper)

Meanwhile environmental groups have sued to protect habitat for the lynx, which includes portions of Northeast Washington. (Conservation Northwest)

Montana researchers looking for a better understanding of how hunters and bears interact. (Billings Gazette)

The U.S. Senate rejected a bill to build the controversial Keystone XL pipeline this week by a single vote. (CNN)

And industrial pollution is turning Canadian lakes into jelly. So we can look forward to that. (WaPost)