Transit, public use and the problem of parking lot pee-ers

Yesterday I went to the Spokane Transit Authority board meeting where the “task force” of concerned business owners — led by Greater Spokane Incorporated, Visit Spokane and Downtown Spokane Partnership — gave their opinion on how STA should use its Plaza.

The task force’s recommendations were mostly in line with STA’s existing plans, but they diverged in one hugely significant way. Rather than expanding the Plaza to bring in the community and create greater connectivity for non-transit users, they advocated the opposite. 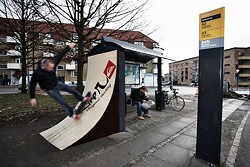 Saatchi & Saatchi
In Copenhagen, their bus stops double as quarterpipes. Can we at least have a Plaza that’s also an event space?
They suggested moving all services to the first floor. Shuttering the second almost completely. Removing the existing escalator and not replacing it. Restricting all retail uses to only the sorts of things that transit riders might be interested in.

After the meeting, I drove back (sorry STA) to Fellow, the coworking space I started last year. As I was parking, I noticed a man urinating on the building between two cars in our lot.

He wasn’t drunk- or stoned-seeming. He was just a dude, in need of relief, taking a leak in broad daylight.

He noticed me as he was finishing up and, with a hip hitch and a zip of the trousers, he smiled and said, “Hi there.”

My first thought was how that parking lot experience felt like a metaphor for what had just happened at STA — someone coming to a place my friends and I have worked very hard to make cool and literally taking a piss on it.

But upon reflection, it’s most productive to think of the parking lot incident less as metaphor than an illustration.

The task force’s plans will never achieve their desired effect because you can never restrict use in public spaces enough to get rid of the parking lot pee-er.

Let me paint a picture of the space in which he was peeing: It’s a surface lot on a stretch of Howard that has almost no street-level retail. It’s also near the train tracks. No one purposefully walks around there unless they have very specific business in one of the handful of buildings on the block. And even then, people drive up, park as close to their destination as possible and shuffle quickly indoors.

I’ve seen people get in their cars and drive from one side of the tracks to the other.

I’ve never felt unsafe in this lot or on the street itself. It’s just ill-suited for pedestrians and starved for destinations. As a result, I have only ever had neutral, negative or just weird experiences on that stretch of road. No one besides our parking lot pee-er hang out there because, besides the beautiful new SUMAC mural under the trestle, no one has given those blocks a second thought for maybe a decade.

Conversely, all the traits that make it a bad place to hang out and have positive experiences is exactly what makes it such a prime place to drive up and find some random dude peeing. It’s secluded and empty of people.

We all recognize the STA Plaza currently suffers from usage woes. It’s a big space without much going on, and big spaces that are empty of people are hard to secure. Both the STA’s plan and the task force’s plan seek to solve this problem, but in opposing ways.

The STA wants to increase amenities to open usage to the entire community, offer more opportunities for engagement and make the Plaza a gathering place. The task force is asking STA to narrow the Plaza’s feature set to only the sorts of things bus riders absolutely need.

The problem with that plan, of course, is that the Plaza is still a public space. Even if you reduce the use to basically nothing, people are still free to hang out.

We also know how to make those places safer: make them more engaging. We turn an unused hillside into Huntington Park. We plan events to offset the lack of retail on Wall.

The crazy thing here is that DSP, GSI and Visit Spokane have all recognized this. DSP was absolutely instrumental in helping Terrain put on Bazaar, the art market we launched this June on a disused stretch of Wall St. I’ve had conversations with folks at Visit Spokane about their desire to drive tourism by activating public squares all around the city. All three entities were enthusiastic supporters of our recently passed park bond.

They totally understand the vision!

I worry though, that because of the fraught, 20-year political history of the project, and the pressure being exerted by certain downtown businesses, no one is recognizing that the Plaza has the exact same potential for activation as Huntington Park or Wall Street. Honestly, I think it has an even greater potential, because it’s indoors and is already the nexus of our transit system.

Let me be the person who says this: Good as it is, I don’t think STA’s plan goes far enough.

One of the greatest revitalizations of a public space I know of is the transformation of Portland’s Pioneer Courthouse Square from a squat parking garage in the middle of the city into a thriving meeting place.

They did it with smart planning aimed at attracting the greatest diversity of people possible — just like STA has done — but then they went further: creating a separate entity to program the space, filling it with cool stuff a couple hundred times a year. Now it’s the home of concerts, festivals and events, a hub of downtown Portland, and a big tourist attraction.

Now imagine how it would feel if a tourist or business traveler coming to Spokane for the first time grabbed the shuttle from the airport, rode downtown and found themselves disembarking onto an art market, or a free concert, or just a bustling place with a diversity of people and a diversity of shops.

Isn’t that the sort of town you’d want to explore? Like, “Wow, if their bus Plaza is crackling like this, what must their clubs be like? Their restaurants? Their neighborhoods?”

Then who better to ferry that person around to those destinations than, you know, STA itself. The word “synergy” gets thrown around, but come on now.

Now imagine that same tourist getting off the shuttle to a Plaza renovated according to the task force’s specifications: a smaller, more utilitarian space for the workmanlike ferrying of people from place to place, with maybe an employment office in one corner.

At any other time than peak hours, the space would feel empty and maybe a little alienating. If that tourist had to spend any time waiting for a transfer in the task force’s version of the Plaza, I honestly ask myself who he or she would run into.

It’s still a public space, even if no one’s using it, so the only person I’d put money on is that smiley guy from the parking lot, making the most of the solitude to take a quiet pee in the corner.

CAT FRIDAY: It's Adopt a Senior Pet Month, and Star needs a home