Eat your heart out with Pizza Rita's newest food challenge 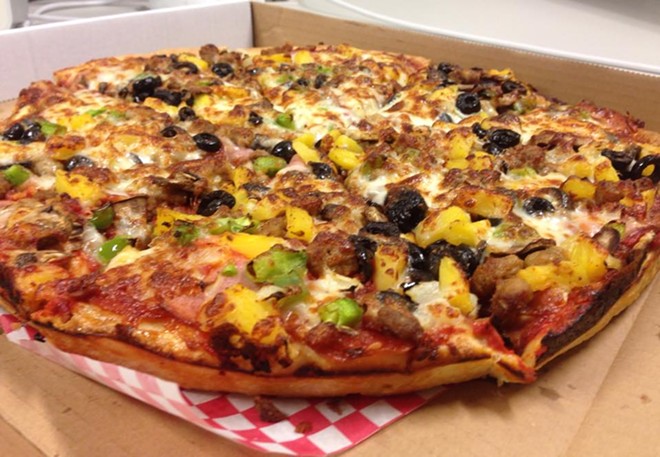 Many have tried but only few have triumphed. To be exact, only 28 contestants amongst 130 brave souls have conquered the infamous Pizza Rita 5-pound pizza challenge. These true testimonies to talent gorged their way through 24 oz. of crust, 12 oz. of sauce, 9 oz. of cheese and 35 oz. of various meats and veggies to earn their rightful plaque on the wall of champions.

The rules of the challenge are simple: the pizza must be consumed within 30 minutes, only one person can tackle the monstrous pizza, substitutions can be made as long as the weight remains at five pounds and previous winners can only partake once a year following their victory.

Spokane's Torrey Lybbert holds the current winning record at 11 minutes and 48 seconds. In addition to a plaque on the wall, winners receive Rita Bucks (Pizza Rita gift certificates so they can eat even MORE pizza), a $40 donation to a charity of the winner’s choice, a stomachache and a pride boost.

In recent years however, Pizza Rita has seen a decline in people daring to try their hand at the 5-lb. challenge. In light of so little participation, owner Brian Dickmann will be adding a new gut-busting pizza challenge to the list: Rita’s Rapid Challenge.

“It will be a test of speed,” Dickmann says. “If someone can consume a large thin-crust single-topping pizza in under five minutes we will give them 50 Rita Bucks.”

The thin-crust pizza is meant to entice participation from those who are intimidated by the original 5-pound challenge.

According to Dickmann, Pizza Rita offers these contests for three main reasons: for charity, for fun and to demonstrate the true meaning of a “large pizza.”

“Everyone says ‘we have a large pizza’ but really, how large is large?” Dickmann says.

Pizza Rita hopes to begin offering the Rita’s Rapid Challenge this January. These challenges are not for the faint of heart, and those willing to eat his or her heart out can mentally prepare themselves for the physical turmoil by reading former Inlander staff writer and current contributor Jordy Byrd's testimony of the 5-pound challenge here.