In this week's issue, we look back at the biggest news and culture stories from 2014. But just because we write 'em, doesn't mean you read 'em (sigh). Here, dear readers, are the stories you clicked on the most. From zombies to Bigfoot, Dr. Who to Adam Morrison, rediscover our 10 most popular stories from the past year:

10. On the menu at the Spokane Downtown Daiquiri Factory: 'Date Grape Koolaid'

Spokane Downtown Daiquiri Factory Facebook
Last January, former Inlander reporter Heidi Groover broke news about about a distastefully named beverage at what was once Spokane's most notorious downtown bar. The controversy, which was covered by TIME, Jezebel and Cosmopolitan, sparked protests, a menu change and an eventual eviction.

9. In defense of Steven Moffat, Doctor Who's controversial showrunner
In an insightful analysis of Doctor Who writer Steven Moffat's career, the Inlander's resident TV expert Daniel Walters defends Moffat against his critics. "Doctor Who is a show about the wonder and terror of time as well the wonder and terror of space," Walters writes. "Moffat understands that, using time travel as a tool to explore the horror of old age and loneliness, to examine the redemptive power, not of love, but of memory."

8. We all watched "Z Nation" and here's what we thought

Z Nation
Zombie baby lives!
In September, the Inlander staff gathered 'round pizza and diet soda and watched the first episode of Z Nation, the Spokane-shot, post-apocalyptic, definitely-not-The-Walking-Dead SyFy series about zombies taking over the world. Our critical take: "not that bad" and for the love of God, no more zombie babies.

7. Dawn of the Donut to close next week 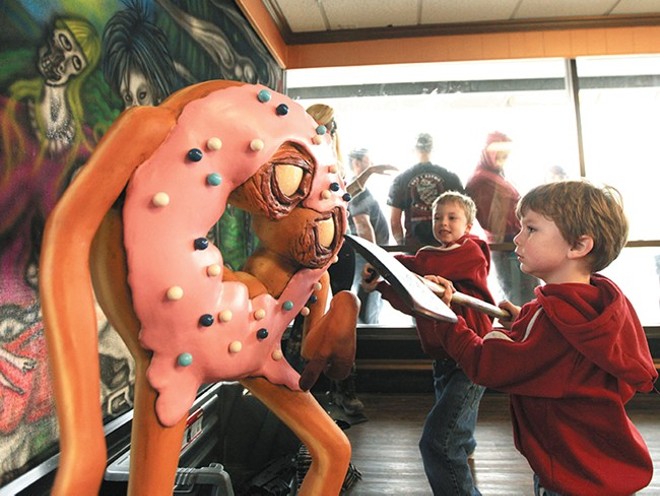 Young Kwak
Dawn of the Donut opened last August.
A little over a year after it opened, Spokane's favorite zombie-themed, art-stealing donut shop took to Facebook to announce its unexpected closure. The shop rose from the dead (see what I did there?) under new ownership and a new name a month later. 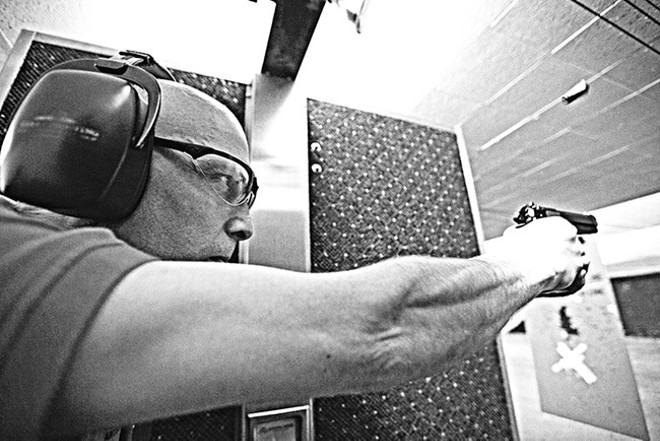 Young Kwak
As base police officer, Andy Brown ended the Fairchild rampage when he fatally shot the gunman.
Survivors of the 1994 mass shooting at Fairchild Air Force Base remember the day that changed their lives forever.

4. Why we're still afraid of Godzilla
At the heels of the May release of the latest Godzilla reboot, former intern Paul Sell writes about what makes the classic monster so scary after all these years.

3. WEED WEDNESDAY: An update on Spokane's stores and the first ever marijuana market study

Young Kwak
Mike Boyer, the inaugural customers at Spokane Green Leaf, proudly displays his weed for the cameras.
A week after the first recreational pot shops opened in Washington this July, Groover recapped the big headlines from the reefer world. (Remember that dude who was supposedly fired for being Spokane's first legal pot buyer? He got his job back!) Read all our Weed Wednesday posts here.

Young Kwak
Bigfoot researcher Paul Graves poses with his collection of Sasquatch footprint casts.
"Never hold a staring contest with a Sasquatch," plus everything else I learned while searching for the Pacific Northwest's most infamous hairy biped with some of the biggest names from the Bigfoot-research world this past summer.

1. Calling all Spokane-area zombie extras for a new TV show

Young Kwak
Zombie extra Susan Cleveland, second from the right, prepares for a scene.
Far and away our popular story in 2014 was an April blog post announcing Z Nation's casting call for Spokane-area extras. Dang, you people really do love your zombies.