Long-time Spokane firefighter Scott McCann’s vision is simple: save the lives of those who save lives. With the death toll of firefighters and other first response personnel on the rise due to rapid fire spread, McCann set out to innovate what he's dubbed the BADAXX — a tool designed to be more efficient than the traditional axe used by first responders.

Last month, McCann launched a Kickstarter campaign with a goal to raise $75,000 for the BADAXX's first production run. With four days left in the campaign — ending this Friday, Jan. 9 — McCann's pitch has more than exceeded its funding goal, with more than $96,000 in contributions as of this posting.

The revolutionized axe features a blade with beveled edges, a bailout anchor device and an attachment point for rappelling. Following a series of tests, the BADAXX has been deemed a tool that can significantly help rescuing fire victims and add to the safety of the rescuers as well. Pretty badass, right? 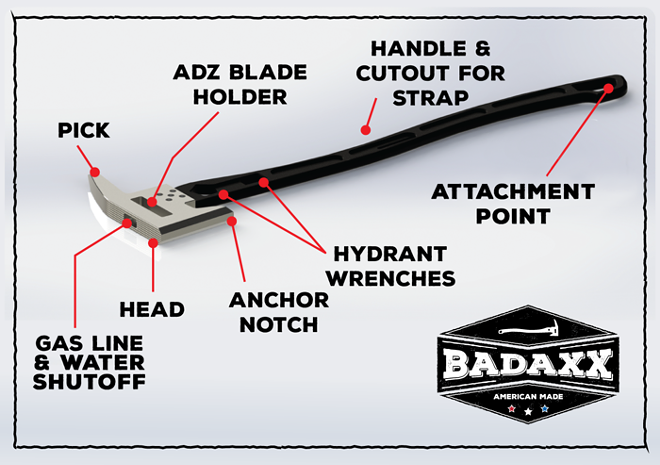 “Our reaction when we hit our goal was relief and excitement,” McCann says. “From the beginning we believed the BADAXX would be well-received by firefighters everywhere.”

Taking a chance on altering the seemingly outdated tool may have started out as a chancy move, but with great risk came great reward. The personal investments made by McCann, along with his wife, Karen, eventually paid off.

“Being that the fire axe has gone virtually unchanged for 150 years, we knew we would meet mixed reviews,” McCann says. “We have been overwhelmed with the great reception we have received thus far.”

With the pledge goal reached, production will begin shortly. And McCann is also going to donate a free BADAXX to a major fire department in each of the 50 states with the "extra" donations he's gotten on Kickstarter. If current donation levels remain constant McCann will be able to donate a BADAXX for each six additional donations. So far, he has enough funding to cover seven states.

“This has been quite a roller coaster of emotions, but we can see the light at the end of the tunnel,” McCann says.