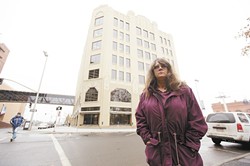 Jackie Murray wants to change how the city handles immigration.
Supporters of an initiative that would overturn a city ordinance barring employees, including police, from asking about someone’s immigration status can start collecting the 2,500 valid signatures needed to get it on the November ballot after clearing a legal hurdle today.

In Spokane, citizen initiatives need to be cleared by the Office of the Hearing Examiner, which makes sure that they’re not too legally zany, before supporters can start collecting signatures.

The initiative was given the green light by the office earlier today in a six-page memorandum that basically states that the measure fits within the legal parameters established by the city.

The sponsor of the initiative is Jackie Murray, a 59-year-old Spokane truck driver. The issue has already been the subject of a long and heated city council session held earlier this month.