Justified was always a Western, right down to the cowboy hat perpetually perched atop the head of Raylan Givens’ head, the U.S. Marshal with a quick trigger finger.

Every great Western, of course, needs a man in a black hat to stand on the other end of Main Street, squinting at the high-noon sun, as our hero lunges for his six-shooter. Enter Boyd Crowder.

Balding, with the hair in his back sticking straight up, Crowder’s visage isn’t close to the Tumblr-fan-page worthy mug of Givens. He doesn’t need to be. 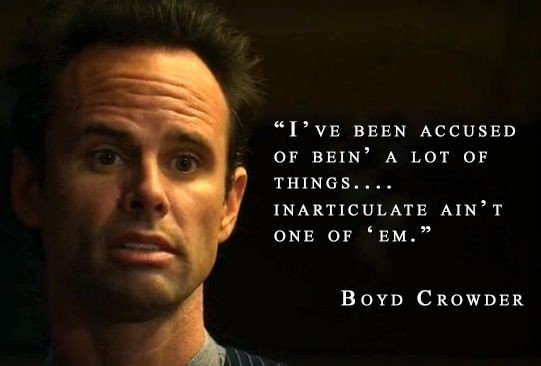 After a mostly disappointing Season 5, one that strangely mistook deaths for stakes and blood for momentum, Justified hones in on the central conflict between Givens and Crowder. They grew up in the same shitty town, choking down the the same shitty coal-mine dust. One ended up an outlaw; the other ended up a lawman.

Boyd Crowder could be unarmed, surrounded by big men with big guns pointed directly at his face and still be the scariest man in the room. That isn’t because Crowder’s an especially impressive in combat.

He’ll play the I’m-just-a-simple-country-fella card, even as his effortless loquacity betrays the mendacity of that particular conceit. He’ll swirl his monologue around like a tumbler of Kentucky whiskey, before drinking deep, savoring the sound of the words, swishing them in his mouth, letting their meaning hang for a moment. And then comes the burn.

Maybe's already paid off your cronies, and with a single word, the guns pointed at him turn to point at you. Maybe he’ll sweet talk you with a deal so persuasive you can’t help but lower your sights. Maybe he’s stalling you just long enough for Givens to burst in and force you to holster your weapon.

You got a sense that his swastika tattoo wasn’t a matter of racist ideology, but a sort of hood he could slip on to attract the right type of fools. Fools are plentiful in Harlan County. Givens has shot plenty of them. But only Crowder could make them dance.

Over the years Crowder's burned though a half-dozen possible personal motivations: Greed, envy, ego, control, the love of a good woman. None of those feel like the primary driver. There's something richer at play.

Actor Walton Goggins previous defining character, Shane Vendrall on The Shield, ended in one of TV’s great tragedies. There, you got the sense he was more of a victim – a weak man corrupted by proximity to corruption.

By contrast, Crowder, even when backed into the tightest of corners, always had control. Yet, he seemed obsessed with destiny — driven by a desire to escape his inevitable, fatal end and helplessly drawn to it. It’s the same for Givens. Neither can escape Harlan. Neither can escape the other.

For six seasons, Crowder and Givens have been playing Harlan Roulette with each other. This six-shooter has six bullets, and this season one or the other will pull the trigger for a sixth time.


(Justified airs on Tuesdays at 10 pm on FX)