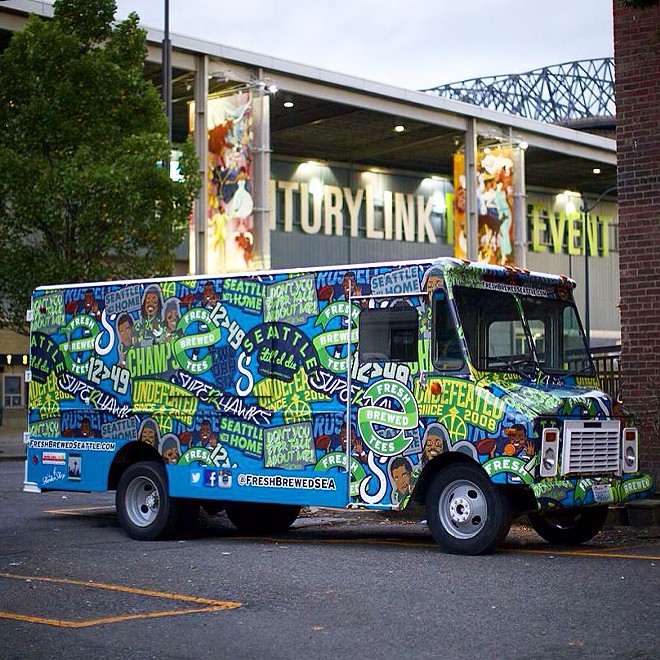 This Fresh Brewed Tees apparel truck rolls through Spokane as part of its #TwelveTour to the Super Bowl.
You could head over to the Grocery Outlet parking lot on West Third for some knockoff Seahawks Super Bowl swag, OR you could meet up with the Fresh Brewed Tees Seattle truck this evening. The producer of super soft and sassy (licensed) sports-themed T-shirts is stopping in Spokane from 5 to 7 pm at the Swinging Doors in its blue and green apparel truck — the whole idea being to rally the 12th Mans together before heading to Super Bowl XLIX.

“Anytime the 12s are gathered, it’s going to be a party,” says Fresh Brewed Tees partner Jamie Munson, who runs the Seattle branch.

Boutique trucks aren’t a new thing, as reported on earlier this year, but one
click to enlarge 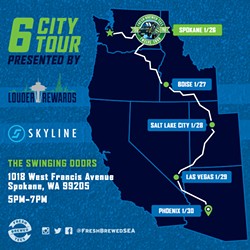 that’s road-tripping through the country en route to the Super Bowl is certainly different. The six-city tour kicked off in Seattle this morning and continues through Spokane, Boise, Salt Lake City and Las Vegas before arriving in Phoenix on Friday just in time to gear up for the big game — where the Seahawks are set to deflate the Patriots’ huge-ass egos and repeat sweet victory.

Originally from Cleveland, a city that’s had its unfair share of sports heartbreak (although Mariners fans may beg to differ), Fresh Brewed Tees started a Seattle branch after owner Tony Madalone experienced last year’s NFC Championships, when the Hawks beat the 49ers.

“Tony was blown away by the city of Seattle and its fans,” explains Munson, while stopped at a Jack in the Box to eat before taking on Snoqualmie Pass in the company van. “He decided he wanted to expand the company to the Seattle market too.”

A recent (slightly trippy) Fresh Brewed Tee design.
Finding Munson, a Seattle native, on Twitter, the Madalone's company has successfully expanded. This week, the Fresh Brewed Tees caravan includes Munson and Madalone as well as five other people and one other vehicle. They don’t have Super Bowl tickets yet, but are still open to going if anyone is offering.

Tonight, expect various drawings, $100 worth of giveaways and no Patriots gear. While there won’t be any tees not already offered online, there will be shirts autographed by Seahawks cornerback Jeremy Lane.

And if the Cleveland Browns ever met the Seahawks in the Super Bowl?

"We'd root for our respective teams," Munson says with a laugh. "Our company would be able to handle it."