Spokane City Council will remain silent on a pair of controversial trade agreements the United States is currently negotiating.

Last night, the council voted to table a resolution brought by Councilman Mike Fagan that would express opposition to legislation in Congress that would hasten the approv 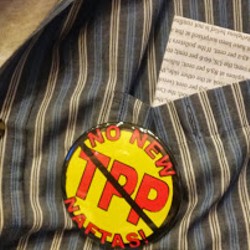 After hearing from a parade of people with perspectives from across the political spectrum speaking in support of the resolution, Council President Ben Stuckart, in response to a question from Councilwoman Candace Mumm, said that a council rule prohibited it from passing any resolution or ordinance not directly related to local affairs or municipal business.

Fagan said that he drafted the resolution after hearing from a broad range of constituents from various political stripes who had concerns about the trade agreements. He said that while he was aware of the rule, he pointed out that the council recently passed a resolution in favor of federal legislation regulating oil trains, many of which pass through the city.

“Now, trade agreements are very relevant here in the City of Spokane even though this is being looked at the federal level or will be,” Fagan said.

However, Councilman Jon Snyder, who said there were valid concerns about the agreements, disagreed.

Snyder made a motion to table the resolution indefinitely, meaning it would not be considered by council, which passed with Fagan casting the only no vote.

Tasty evening, writing on race and Wayne "The Train" in Spokane tonight