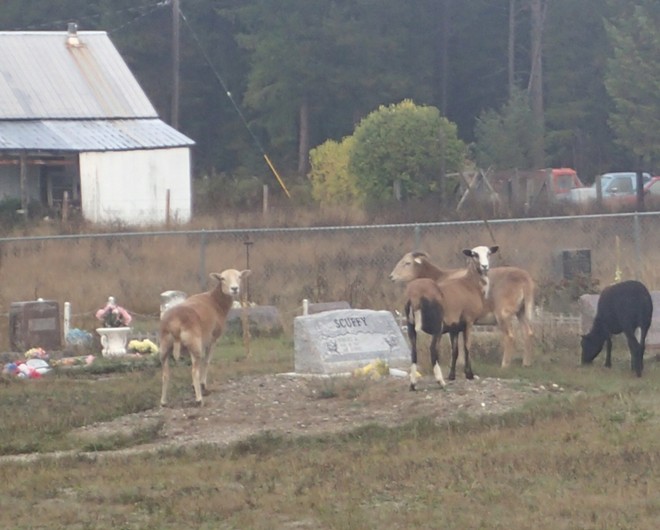 Courtesy of Donna Godes
If Godes was frustrated when the fence was moved, she became even more so when she noticed a herd of goats she believes to belong to Pratt grazing around the headstones.
For years Jim Carney had mowed around the huge hunk of concrete in his Spokane Valley lawn. He always planned to move it, someday. That day came recently when, in a moment of gusto, he dug around the corners of the slab and heaved it from the soil. He flipped it over and did a double take when he saw the inscription. Carney had just uprooted a tombstone.

The name of the deceased wasn’t hard to make out: Sergeant Major William L.V. Myers, a World War I veteran who died in 1968. Was this Myers fellow in Carney’s backyard?

“He doesn’t belong inside the garage here, he deserves some kind of internment,” Carney told KREM 2. It turned out Myers wasn’t actually in Carney’s backyard, though. Just his tombstone.

KREM 2 and the Veterans of Foreign Wars set about finding Myers' family. After circulating the images and dramatic story on social media, they got their answer: Myers is safely buried elsewhere in a shared grave with his wife, marked by a single headstone. The 250-pound tombstone found in Carney’s yard was salvaged by one of his sons and later forgotten in the yard. Now the monument is back in the family.

Up in Northport, Washington, a property line dispute would be a lot clearer cut if all grave markers were as durable as Myers’. Last May, Stevens County Sheriff's Deputy Paul Murray was dispatched to investigate reports that 61-year-old John Pratt was tearing down a fence. When Murray arrived at the scene, the cyclone fence had already been torn down and moved. Five feet deep into his neighbors property. Fence moves are often risky business, but particularly so in Pratt’s case because his property line is shared with a historic cemetery. Forest Home Cemetery caretaker Donna Godes believes Pratt's fence now sits directly on top of graves, many of which are not clearly marked. The cemetery was dedicated in 1912 but Godes says the oldest grave marker dates to 1851. It is home to as many as 400 graves, an impressive feat in a town with a population of 295. Many of Godes relative, including her great-great grandparents, are buried there. She plans to be buried there herself one day.

“Mr. Pratt stated he has been fighting over the fence line for the past ten years,” wrote Murray in his initial report. Stevens County  Prosecutor Tim Rasmussen charged Pratt with the Unlawful Removal of a Grave Marker later that month.

Pratt has a survey showing the property line, but survey or no survey, it is against the law in Washington to "willfully destroy, cut, mutilate, efface, otherwise injure, tear down or remove, any tomb, plot, monument, memorial or marker in a cemetery, or any gate, door, fence, wall, post, or railing, or any enclosure for the protection of a cemetery or any property in a cemetery," according to charging documents.

Pratt has requested a jury trial. If convicted, he could face five years in prison and a $10,000 fine. But he still wouldn't be forced to move the fence back, Godes says.

"When a person is convicted of a felony charge, a judgement is pronounced by the court in accordance with the law," says Rasmussen. "Those generally consist of fines and a sentence that involves some sort of commitment."

Judgements do not typically include orders to, say, move fences.

"I don’t want Mr. Pratt charged," says Godes. "Just get that fence out of the middle of them graves."

Godes has a couple more avenues to pursue: She's reached out to the Washington Department of Archaeology and Historic Preservation and is looking into methods she could use to prove the human remains are beneath the fence.

"There’s no doubt in my mind there’s graves, no doubt," says Godes. "But without ground radar, I can't prove it."

For his part, Pratt tells the Spokesman he’s being demonized over the five foot deep band of browning grass.