No doubt your social media feeds have been full of images from Sunday's Bloomsday run, where more than 42,000 racers and walkers took to the streets on a beautiful day for some great exercise and one big party. We have a great gallery of pictures from all over the Bloomsday course that is well worth your time to check out.

Among them you might spot some shots of first-time Bloomsday racer Adam Finney, a 32-year-old Chicago native who came to Spokane this year for the wheelchair race, only to hit the pavement in a dramatic crash that was caught by our photographer Ryan Sullivan. It's no shock that the big hills might cause a few tumbles, and we're happy to report race organizers told The Inlander Finney was fine after being taken to the emergency room. He even plans on coming back and racing Bloomsday again next year.

Sullivan was waiting at the crossover of Latah Creek, less than two miles into the course, and watching for the first wave of wheelchair racers since they took off from the starting line earlier than the other groups. He figures Finney was about the 10th or 11th racer to come zipping down the hill.

"It looked like he just came into the corner with too much speed," Sullivan says. "He veered right and connected with the curb, and he actually ended up under the guardrail instead of going right into it, which was good."

Finney and the paramedics got a laugh, Sullivan says, when a second group of medics joined the first responders and started doing a routine check of Finney's wounds. One of the medics asked if he was feeling a lot of pain in his legs — before noticing the nearby wheelchair and apologizing with a laugh, "Oh, I'm an idiot."

Here's a look at Finney's wreck and the emergency crew helping him out: 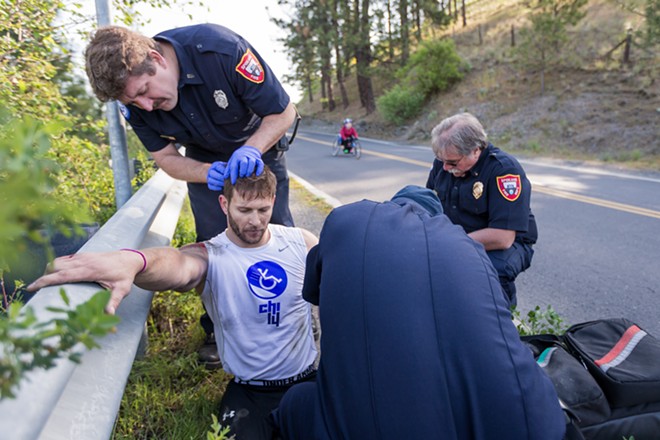 Ryan Sullivan
Finney is in good spirits despite the end of his race.
click to enlarge

Ryan Sullivan
Prepping for a trip to the ER, where reports are Finney is just fine.
For all the participants, here's a reminder that the results books for Bloomsday 2015 will be available on Tuesday, May 5.

Are Spokane detectives on the trail of a serial killer?