Is it fair for teachers to attack the legislators' 11.2 percent salary increase? 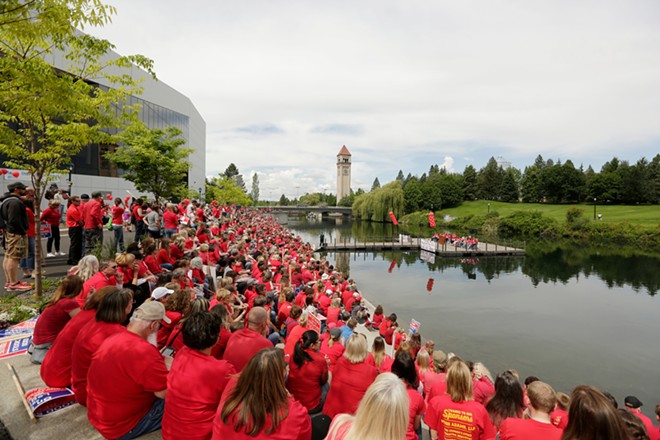 Young Kwak
Teachers and other school staffers from East Valley and Spokane Public Schools gather in Riverfront Park to protest education funding policies
Over a thousand teachers, school staffers, and community members gathered near the floating stage at Riverfront Park today, dressed in red and protesting a whole slew of frustrations. Most teachers were from the Spokane Public Schools and East Valley, though some teachers from other districts — like Central Valley — took a personal day to join the protest.

Instead of focusing on one decision or policy, the union kept things wide open: Many of the signs they carried had a clock with the caption "IT'S TIME ______."  And teachers, in permanent marker, filled in the blank: "To Full Fund Education," "To Lower Class Sizes," "For the legislature to do their job," "For competitive salaries and benefits."

While both houses of the legislature plan to increase education funding this year, and give teachers a modest cost-of-living increase, over 60 districts statewide have walked out anyway.

And one figure has become a particularly interesting talking point:

"On STRIKE against the Legislature.
- Ignore VOTERS
- Cheat our kids
- DEFY the Supreme Court
- Get 11 percent raise?"

For teachers, who have been waiting six years for a raise, it's easy to see why that last point could stick in their craw. But is it true?
click to enlarge

Daniel Walters
Bonnie Banicki, a second grade teacher from Balboa, shares her frustation with the legislature.

In context, it's a little more complicated. (Read this rundown by former Inlander reporter Joe O'Sullivan from May.)

First of all, the legislature did not vote to give themselves a raise, like it might sound. In fact, that would be the Washington Citizens’ Commission on Salaries for Elected Officials. The group was set up to remove the political aspect from wage increases for politicians.

She's referencing Initiative 732, passed by the legislature 15 years ago. The legislature overwhelmingly suspended that initiative in 2011, due to a major budget crunch. But the first figure is inaccurate: Only 10 members of the salary commission voted to increase legislator salaries, while five voted against it.

The signs also ignore the fact that legislators, like teachers, haven't received a raise since 2008. And like legislators, teachers are scheduled to receive a pay increase.
click to enlarge 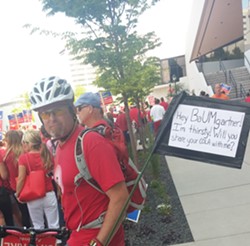 Yet, even if their teacher salaries didn't increase at all, the average teacher salary in Washington— $52,969 — would still be higher than legislator salaries in 2016.

Of course, legislators only work part of the year, and get an extra stipend. And so do some teachers. That's a weakness with comparing teaching to legislating — or teaching to doing anything else. Teachers have a unique set of advantages and disadvantages to their job, including the perks of vacations, job security, and job satisfaction, and the disadvantages of waking up early and spending long nights grading terribly written student essays.

That's one reason why teachers were also carrying signs calling for lower class sizes and reduced time spent testing. It's not just the pay that makes a job feel worthwhile. It's the experience.

Bands to Watch: Where are they now?