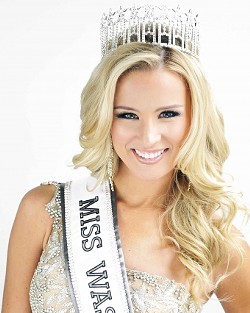 Misswashingtonusa.com
2015 Miss Washington USA, Kenzi Novell
There's been quite a few headlines regarding the Miss USA pageant lately. With Donald Trump in the spotlight for his racist remarks and the announcement of NBC's decision to not air the show, the actual contestants have been overshadowed by controversy.

Normally, we wouldn't care, but in this year's pageant, Washington State is represented by Spokane native and Gonzaga University graduate Kenzi Novell. This year's Miss Washington was born and raised in Spokane, and has spent the majority of her life living here. She attended Lewis and Clark High School and then went on to Gonzaga, where she majored in public relations. This hometown gal completed her first year of college at the University of Washington, but said she was drawn back to GU because of the small class sizes and the community feel. "You're not just a number there" Novell said of Gonzaga.

During her time in college, the 24-year-old Novell was part of the Gonzaga Bomb Squad, a hip-hop dance team that performs regularly at men's and women's basketball games, as well as events like new student orientation and flash mobs at Riverfront Park. Novell claims that she is country girl at heart, but wanted to try something new, so she tried out for the hip-hop group over the traditional dance team.

It is actually through dancing that Kenzi got involved in pageants in the first place. When she was younger, her dance teacher taught choreography for a pageant that needed participants. When she got word of the event, Novell says her competitiveness got the best of her and she had to try out. Now, 17 pageants later, she's heading to Baton Rouge, Louisiana, to compete for the national title of Miss USA.

On TV its seems like everything is so fluid. We see all of the beautiful pageants queens under the lights and in front of the cameras, but is there ever anything that goes wrong behind the scenes? Novell said she's had a few mishaps — the main one being a white, see-through swimsuit that she didn't realize was translucent until the day she was supposed to wear it. After running to the store and sewing in an extra layer, Novell said she fixed everything and was able to continue on like nothing was wrong.

Novell says she is looking forward to this pageant, even amidst the drama from Miss USA owner Donald Trump. After hearing the news that NBC and Univision would not air the show, Novell said, "It was a surprise and it was kind of unfortunate. But we [Miss USA participants] all rallied together and will make the most of it." She says she is very thankful for Reelz, the independent TV network, for picking up the show so that her family here in Washington that can't make it to Baton Rouge can still watch the show.

Once all is done and the pageant has wrapped up, Novell says she can't wait to return to Spokane. Asked the first thing she will do once she gets back, she immediately said she will stop by Jacob's Java on the South Hill for one of their specialty cheese bagels.

The Miss USA pageant will air on Reelz on July 12 at 5 pm Pacific time. Here's a look at Novell's official contestant video: