CONCERT REVIEW: Melissa, Debbie and Joan pulled off one of the hottest rock shows of summer 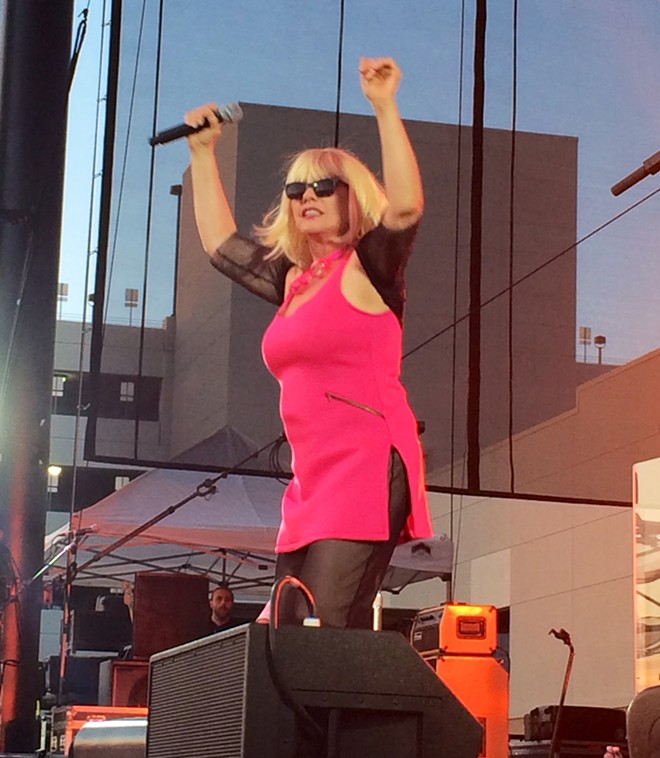 Laura Johnson
Debbie Harry still has got the moves, even at 70.

Last night at the Northern Quest Resort & Casino, Melissa Etheridge, Blondie and Joan Jett played one of the hottest shows of the Inland Northwest summer – not just because it was 90 degrees out, but because it moved and entertained and brought a whole bunch of different folks (punks, housewives, lesbians, grandparents, teens) to the packed-out outdoor concert space.
This was the only time the trio of acts was booked to play the same stage this year — Blondie and Etheridge have toured a bit together, but Jett is opening for the Who. Somehow, Airway Heights lucked out getting the legendary rock ‘n’ roll artists in one spot. 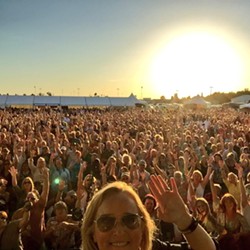 Twitter
Melissa Etheridge's selfie from Monday night's Northern Quest concert.
the show. She has this voice capable of taking over whole planets and guitar skills to match (her guitar-playing ability is seriously underrated). As people filed into their folding-chair seats for the spot-on 7 pm set, Etheridge played songs to get the crowd movin’ and shaking, to forget that they were sweating hard.
“I can’t seem to get enough water,” she admitted from the stage, as she drank out of a purple water bottle. This, of course, moved her perfectly into the hit “Bring Me Some Water.” And even when her vocals did get dry and raspy, she still hit every note.
Throughout the hour-long set, she stomped around the stage while playing all the hits, took on her bass and guitar players, played harmonica, flipped her hair and even took a selfie of the crowd. She never got super-political, just told people to “choose only love.”
The closer, “Like the Way I Do” went on for 10 minutes of pure aggression complete with an interlude where Etheridge nearly killed her acoustic guitar.

BLONDIE
Debbie Harry can still move. At 70, she was up there last night doing kicks, spins, foot shuffles and air punches. Her voice is still there, too, as much as it ever was. Harry’s life partner, Chris Stein, whom she started Blondie with in 1974, is five years younger and barely moves on his guitar, but that doesn’t mean he wasn’t feeling it.
Starting off with the big one “One Way or Another,” the crowd went nuts. At first it seemed like she was saving her voice a bit, but she came back strong, strutting around the stage in a bobbed blonde wig, a pink dress complete with pink goggles around her neck and black platform sandals — basically, everything I wish I was wearing.
There was a point partway into the 45-minute set when some fans chose to sit down; energy seemed to wane. But then Harry started rapping (“Rapture”), moved into a cover of “(You Gotta) Fight for Your Right (to Party!)”, rolled into “The Tide is High” and finished with “Heart of Glass.”
By the end of the set, the audience was all hers.

JOAN JETT & THE BLACKHEARTS
At a certain point it was obvious Jett was fighting off some sort of sickness. There was a big bottle full of brownish liquid next to a bottle of water and box of tissues behind her on stage. Intermittently she’d go back and wipe her nose. But there was never any complaints or excuses from her on the microphone and her snarling vocals were strong. She and her band powered through her set, full of the hits (“Bad Reputation,” “Cherry Bomb”) and some of the newer tunes she’s penned with rockers like Laura Jane Grace of Against Me! and Dave Grohl.
A recent inductee into the Rock and Roll Hall of Fame, Jett was like a little firecracker on stage, mentioning that “Love between three people can be a good thing, especially if one of them is me!” before heading into “The French Song.”
Her huge rendition of “I Love Rock ‘n’ Roll” brought everyone to their feet, while “Crimson and Clover” caused at least one nearby couple to bump and grind with a passion.
Jett was rocking the same haircut as the early '80s, and why change if you’re still one of the coolest punk artists out there? Joan Jett, please never change.