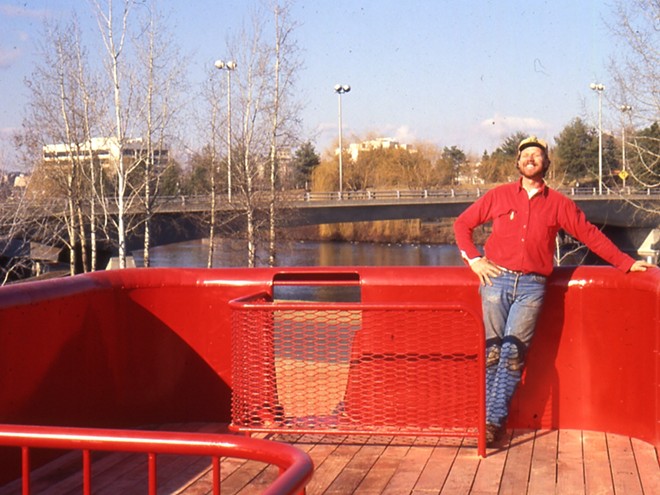 Photo courtesy of Ken Spiering
Ken Spiering stands on his steel concrete art "The Childhood Express" in a never-before-seen photo, taken in Winter 1990.
If you've ever been to Spokane, you've probably seen the world's largest Radio Flyer wagon. It's in Riverfront Park and it's really quite large – 12 feet tall and wide and 27 feet long. The big, red wagon, officially named "The Childhood Express," is nearing it's 25th birthday in January.

Ken Spiering is the artist behind this iconic Spokane monument, and in an Inlander exclusive, he shared three previously unreleased 1990 slides depicting its construction.

“I’m really happy with how well it’s held up and how loved it is. I don’t think you get much perspective on that in the first decade, but after this length of time," Spiering says, regarding the 25th anniversary, "I’m just thrilled with the way this city has received it. How can one not feel tremendous for being a part of making it?” 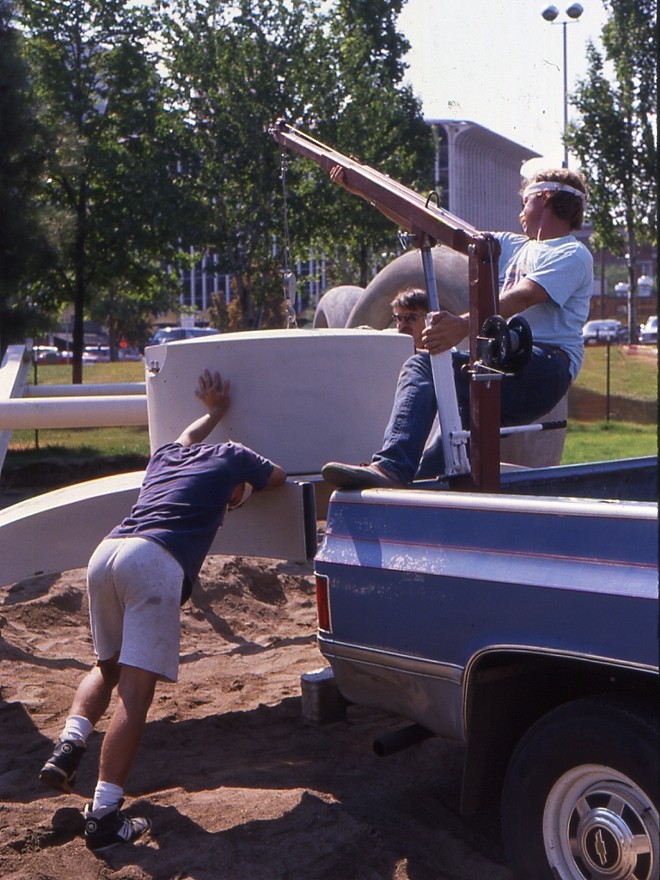 John Fannin
"Passage: Immediate and Eternal," another work by Spiering, is installed in Spokane City Hall.
Perhaps best known for building the wagon, Spiering teaches part-time at Freeman High School, has made other Spokane public art like this mountain goat and "Current Event," the fish wrapping around the convention center. His next project, "Dance of the Redband," is a $200,000 sculpture being installed at the traffic island at Division and Spokane Falls Boulevard.

The Junior League of Spokane, the group which originally commissioned the wagon art in 1989, will host a 25th Anniversary celebration Tuesday, August 18 from 5:30 to 7:30 pm at the "Childhood Express" sculpture. Spiering will be celebrated in a presentation at 6:30 pm.

Junior League President Lesley Culley expressed her love for the wagon in a statement released earlier this week.

“The Red Wagon has become an iconic symbol for both visitors and residents of Spokane,” Culley says. "It continues to fulfill its dedication statement, ‘to Spokane’s children, as a reflection of the past, created in the present, to last into the future.”

Attendees are encouraged to bring their own Radio Flyer wagons. Ken won't need to bring his wagon – it's been installed for 25 years.

Read the full Q&A below to hear how the wagon was built, Spiering’s favorite stories from the installation and what he would change about “The Childhood Express.”

INLANDER: How were you inspired to create "The Childhood Express?"
KEN SPIERING: The project was initiated in 1989 after the Junior League of Spokane put out a request to do a work of art that paid tribute to the children of the past, present and the future. I just couldn’t come up with a good idea. About three days before proposals were due, I ended up just figuring, “Well, I don’t have a good idea, so I guess I’ll let it go.”

Then, when I stopped thinking about what symbol would be a tribute to children, I saw my son – who I think was 16 years old at the time – running a little Radio Flyer wagon off of the terrace at our house. He was having a gas in that little wagon. That’s when I thought it might serve as a symbol for childhood. I imagined it big enough for kids to play in it, and the rest is history.

How long did it take to finish?
I started work in February 1990 and it was completed January 31, 1991. I ended up working full-time, seven days a week, 18 hours a day in my former Manito Park studio as well as installing it on site – I probably fell asleep while doing something. Well, I took one Sunday afternoon of four hours off, so that day I only worked 14 hours. I did this for the whole year.

It was a project that took all the youthful energy and ambition I had at the time, plus the help of generous donors who donated steel, labor and price breaks for materials – at the time, an executive of the organization that is now Cd’A Metals, whose father had a collection of Radio Flyer wagons, sold me the steel at essentially scrap price. They also donated their truck to transport the beams and didn’t even charge me for that. 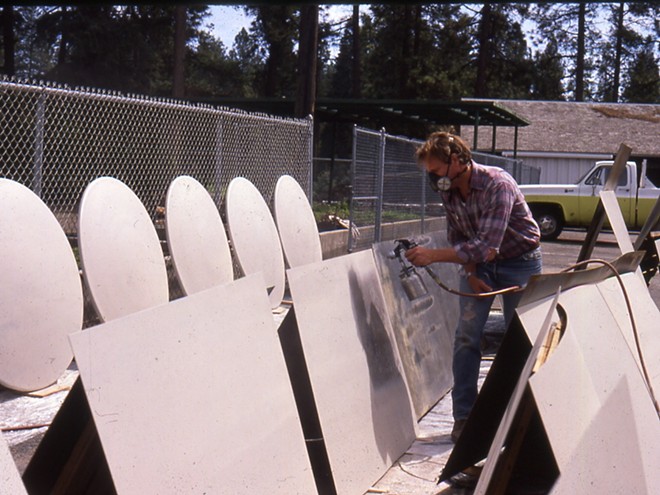 Photo courtesy of Ken Spiering
Spiering worked for just under a year to complete "The Childhood Express."
What sort of feedback do you get from the piece?
I’ve had 25 years of feedback. Where do I start? I run into people who are my age – which now is frighteningly old – and they remember their kids going up on the wagon. I hear nothing negative. It’s always “Oh my gosh, you’re the guy that built the wagon?!” It was a way of doing a business card without having to do a business card – everyone knows me as the guy who built the wagon in this town.

Any memorable stories?
I get stories from all over –– literally from all over. My niece lived in St. George, Utah, and one day, when she was about 8 years old, she was playing with a little kid out in her backyard. The little kid was going on and on about how great this big wagon was in Spokane. My niece ran inside and grabbed this picture of it I had sent her and said “Yeah, this is the one, and my uncle made it!”

I love the days like when I happen to be sitting on the bench near ‘“The Childhood Express” and I watch as a father is walking down the path, pushing his little boy in a stroller. They come around the corner and get to see the wagon and the little boy jumps out of the stroller – the Dad’s yelling “Hey wait! Come back here!” – and takes a mad dash to the wagon and starts playing on it. Dad’s co-opted into being an attentive parent while his kid plays.

I don’t know that the little boy would have been told to go play on the wagon, I think they were just going to walk past. I love that “The Childhood Express” has that draw. It’s certainly not been an embarrassment to have made it, that’s for sure!

If you could change anything about "The Childhood Express," what would it be?
click to enlarge 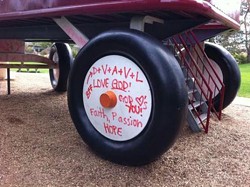 Mike Ellis / KXLY
Religious graffiti was found on a wheel of "The Childhood Express" in 2011.
I would change the need for America to “tag” things. That’s what I would change. I tell you, the first few times I had been up there where the paint on the interior of the wagon bed was essentially scraped clean from all the people scratching through it with their names and everything, I was a little heartsick. You build it with such care, every weld with such care. That’s what I would change about it – but I can’t change that.

This interview has been edited and condensed.