Who schedules all of these amazing musical acts for the same weekend? Sigh. Such is the life of a music fan in Spokane. Sometimes weekends are so packed you can’t possibly attend everything, and other times there’s nothing. This weekend is especially a doozy, start your planning now.

TONIGHT
Perry Street Shakedown kicks off tonight, with the highly entertaining Five Alarm Funk headlining the event. Read our preview and get the full schedule for the last block party of the summer right here. The 21+ beer garden is $3, but otherwise, the event is free. Cathedral Pearls plays at Lantern Tap House across the street from the Shakedown stage starting at 10 pm.

From the moment she burst onto the scene back in the early ’90s, Iris DeMent’s voice has resonated with lovers of folk and country music. Tonight, she brings that voice to the Bing Crosby Theater touting her newest album The Trackless Wood. The all-ages show starts at 8 pm and tickets are $30.

SATURDAY
Taylor Swift wasn’t the first female singer to ditch her country boots and make a statement at the top of the pop charts. Back in 1997, it was Shania Twain rocketing into the Top 40 with hits about feeling like a woman, and Brad Pitt not impressing her all that much. It’s been 11 years since the Canadian artist toured North America, and Saturday the songstress hits the Spokane Arena for what’s being touted as her final tour ever — the Rolling Stones said that, too. Except explosions of all kinds, from the pyrotechnics to Twain’s still-on-point vocals. Tickets range from $46 to $136 and the show begins at 7:30pm.

Also playing the same evening? Sir Mix-A-Lot at the Perry Street Shakedown. And the Hoot Hoots play the after show

SUNDAY
“Weird Al” Yankovic is as white and nerdy as ever. And Sunday, he’s bringing his packed-full-of-accordion two-hour set to the Northern Quest Resort & Casino outdoor stage (the last of its summer concert series). Read our interview with the comedic, but super nice, artist here. The show starts at 7:30 pm and is $35.

Seattle-based singer-songwriter Noah Gundersen grew up in an incredibly religious home, but also one that overflowed with music. These days, like many in their 20s, Gundersen wrestles with the notion of God and life’s purpose, and his often delicate music is filled with existential questions. His new record Carry The Ghost carries on that theme but also includes a little sad stuff (“Heartbreaker” (below) is a must-listen). Seattle indie-folk quintet Ivan & Alyosha, who rocked at last year’s Elkfest, open for Gundersen’s sold-out Bartlett show Sunday at 8 pm.

The Big Dipper brings in exciting power-pop act Mike Krol and his band, with awesome local rock acts Loomer and Whiskey Dick Mountain opening the set Sunday. The show begins at 7 pm and is $7. It's definitely a show not to miss ... unless you're headed to some other show. Tough choices this weekend, tough choices. 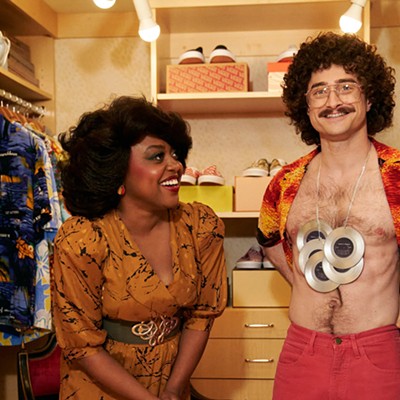