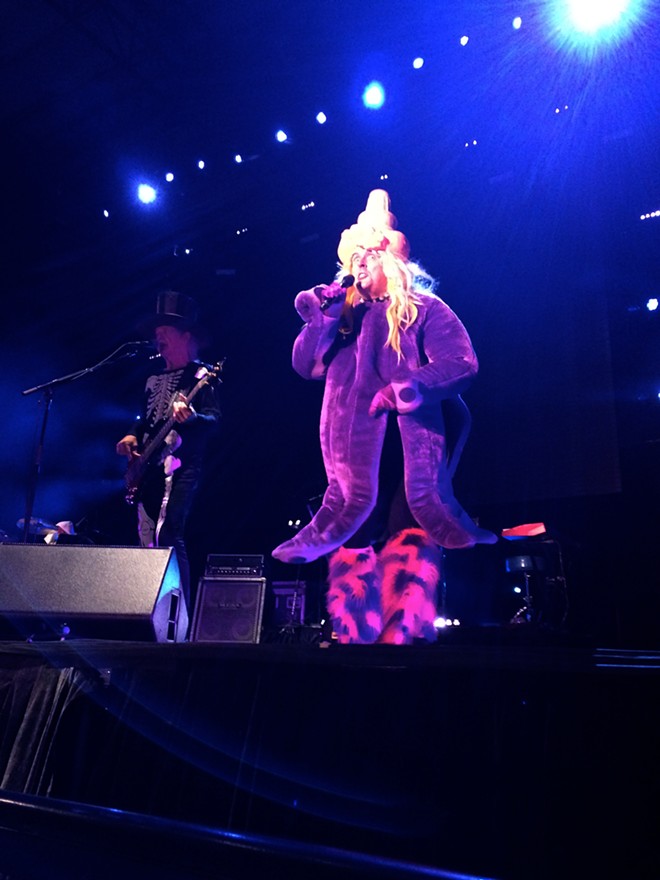 “Weird Al” Yankovic didn’t begin his Sunday night Northern Quest Resort & Casino show onstage, that would have been far too ordinary. Instead the comedic singer began “Tacky,” a parody of Pharrell Williams’ “Happy,” in the venue’s loading area, walking and singing to a camera that was piped onto a large stage screen. Once he made into the performance space — of course clad in his obligatory Hawaiian shirt — the audience went nuts, especially when he climbed onto the stage, finally joining the rest of his band.

It was soon clear that Yankovic is one of the best dancers ever seen on stage. There was the squirming arm-tentacles move and also the move where he shook his entire body as if electrocuted. His Rockette-level high kicks were divine and his dizzying airplane spins couldn’t have been executed as well by a dervish. And when he came out in the Michael Jackson-inspired fat suit for his 1980s hit “Eat It,” Yankovic had the pelvis thrusts, hand action and jumps down to a tee.

This was a packed-to-the-gills two-hour show with no opener; of course Yankovic has enough material to last several days, so that was fine. The laughter was non-stop. When not on stage (swiftly changing into his next octopus/Devo/Amish/rapper outfit) there were short video vignettes — often just clips of previous Yankovic TV/film appearances or references, but also funny fake interviews with celebrities like Celine Dion and Eminem.

“Who’s ready to polka?!” Yankovic asked from the stage.

And with that, the accordion player blasted through a mash-up of recent pop hits, like Miley Cyrus’ “Wrecking Ball,” played all the better with a polka beat and bubbles coming from the stage.

Even through all of the fun and hilarity, as the sun set on Airway Heights some fans realized they should have worn a lot more layers. Some even chose to leave early. Too bad for them, as they missed out on amazing classics like “Smells Like Nirvana” and “eBay.”

While Yankovic’s 2014 album Mandatory Fun, went to No. 1 on the Billboard charts, the new songs like “Foil” (parodying Lorde’s “Royals”) and “Handy” (a take on Iggy Azalea’s “Fancy”) didn’t get as much of a response from the audience as his older work. When Yankovic came out in Amish garb for “Amish Paradise,” the crowd’s smart phones recorded everything and fans of all-ages sang nearly every word to “White and Nerdy.”

The encore was a tribute to Star Wars and the audience who had stuck around, including those who had their light sabers out and ready, stood up and were treated to the favorites“Yoda” and “The Saga Begins.”

Last night, Yankiovic transported his fans to a galaxy far, far away — far away from the troubles of our little lives. It was a satisfyingly funny and creative show, the likes of which was family-friendly but still smart as hell. Not many other shows touring out there today could say the same thing.