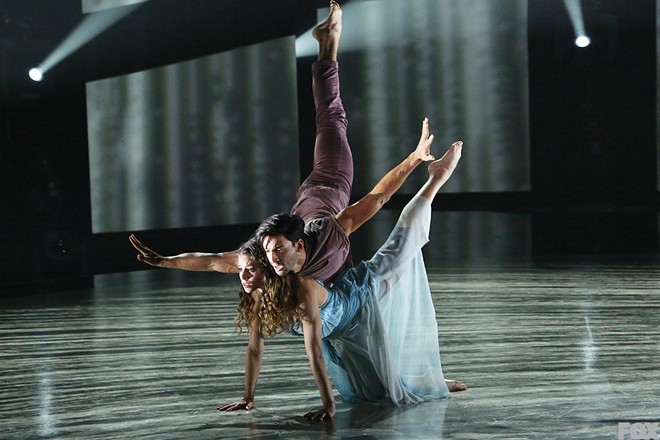 Gaby won partly because she was given some of the best choreography of the season.
Tap dancer Gaby Diaz was crowned America’s favorite dancer on Monday night’s So You Think You Can Dance season 12 finale. And as the reality program hasn’t been renewed for another season, she could potentially be the reigning champion indefinitely. Luckily, for local fans of the show, because yes, people still do watch this show, we can see the Top 10 perform on tour at the INB Performing Arts Center Dec. 28 — a late Christmas present, for sure.

As one of the loyal fans of SYTYCD — a program that’s consistently popular among teens (my age group when the show started in 2005), mothers and grandmothers — I've stuck with the show since day one. Throughout the seasons, the format has changed considerably, but the dancing has always dazzled. Not everything was perfect in season 12. This year’s street vs. stage format was certainly a big experiment, one that more or less paid off, although Team Street was burdened with a few weak links in dancers who never would have made the seasons previously.

Many were shocked that ballet dancer Jim wasn’t among this season's Top 4 dancers, but he had trouble with hip-hop and even some contemporary pieces while his fellow Team Stage dancers Gaby and Hailee just went out and nailed everything they were given. Yes, he was the best technical dancer of the year, hands down, but that doesn’t equate to playing the game.

And our Top 4 certainly played the game. Virgil and Jaja are both working dancers who’ve trained in other styles besides their own, while Hailee and Gaby have clearly trained in lots of hip-hop as well. Gaby especially came in with an edge because she had a different skill than everyone else AND she was highly trained in everything else as well. Here's to hoping the program will make it back for yet another slightly-tweaked season. This time one with rotating judges, Jason Derulo shouldn't have to be there every week.

So, after all of that deliberating, here are my picks for the best nine dances of the year.

Virgil and Joshua hip-hop
Here we have the hardest-hitting hip-hop number ever seen on the show. And the second time performed on the season finale was actually a superior performance — Virgil took it to even a higher level. Joshua, well, he’s always amazing. Choreographers Pharside and Phoenix delivered the perfect answer to Jasmine and Comfort's "Run the World" piece two seasons ago.

Gaby and Zack tap
The object: Tap on all of these boxes and don’t die. Gaby and season 11 finalist Zack did amazing work on one of the sickest tap routines this program has ever seen.

Anya and Jim samba
Guys, I know, the judges gave Jim a lot of crap for this but it’s Anya and Dimitri choreographing and I love it!!! Where was Mary to put them on the hot tamale train? Jim didn’t have perfect technique, but I'd say this performance was the strongest ballroom piece of the season.

Gaby and Joshua hip-hop
Here's the performance where Gaby gets to kill Joshua with her insane hip-hop moves. It's another Phoenix and Pharside crowd pleaser, and is the performance that gave Gaby the edge she needed to win.

Gaby and Robert contemporary
This is the one where you’ll get chills the whole time. Also, it was wonderful to have choreographer Mandy Moore back. I love that she forever goes to the 1980s/1990s power ballads for inspiration.

Hailee and Jaja jazz
This is one of those dances from earlier in the season, the Top 16 to be exact. It is power-feminist greatness. Every woman everywhere  should probably enter every room to this song, accompanied by these moves.

Edson and Jamie contemporary
This is my favorite of the year. The poses hit. The song. Jaimie wasn’t my favorite contestant on the show way back in season three, other than the now-famed hummingbird piece, she didn't impress. Now as an adult her acting and her quality of movement are incredible. The piece tells the story of a woman who has to choose between living or dying and her friend who tries to convince her to stay. Also, it's a Travis Wall piece (his group Shaping Sound, which also includes Jaimie and season 11 winner Ricky, is coming to the INB Oct. 30). With this work, he deserves another Emmy.

Comfort and Virgil hip-hop
This is obviously what it looks like when you move in with your significant other. So adorable and I'm on Team Comfort, always.

Magic: The Gathering is huge; here's what local players anticipate in the next set