Magic: The Gathering is huge; here's what local players anticipate in the next set

Magic: The Gathering
Promo art for the game's forthcoming set, Battle for Zendikar.

I'm proud to be a Magic: The Gathering player, even if I only jumped on the collectible card game's growing bandwagon of fans a little more than a year ago, and at the age of, yes, 26.

Before you judge, know that I'm far from being an outlier. Magic, or MTG for short, has more players now (20+ million) than it's ever had in the game's 22-year history. The spell-slinging game all about summoning creatures and casting spells to bash your opponent from 20 to zero life points in one game attracts players of all ages, genders (though the officially reported male-to-female ratio is pretty evenly split, it's very much the norm for guys to far outnumber gals at in-store events), ethnicities, physical abilities, educational backgrounds, financial status, sexual orientations and career fields. I've played against people old enough to be my parents and young enough to be my children; though a larger percentage of MTG players in the Spokane area seem to be in the high school to young (20-30s) adult range.

If you need more proof of the game's popularity, consider a recent card set, "Khans of Tarkir," that came out last fall is one of Magic's most popular to date. And the game's creator, Wizards of the Coast, based in Renton, Washington, doesn't seem like it's going to slow down any time soon, continuing to build off six straight years of revenue growth. Magic's upcoming set, "Battle for Zendikar," has players like me as anxious as gleeful kids on Christmas Eve to get our hands on the new cards being released next weekend for an event called "pre-release." We'll all be lining up with our playmats, dice and card sleeves in hand at local game stores — Uncle's, the Comic Book Shop (NorthTown), Merlyn's, Gamer's Haven, Direct Damage — hosting the tournament-style events, so come join us if you want to see what the hype's all about.

In the meantime, here's what other local Magic players and I are most looking forward to in the new set: 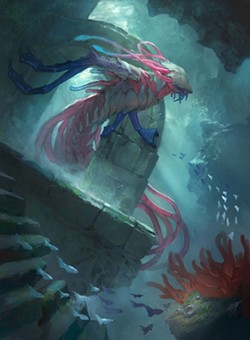 Clint Cearley
Magic cards also have awesome art, like this artist's rendition of the creepy Eldrazi card "Fathom Feeder," which are the alien creatures attacking the plane called Zendikar.

Chris Schafer:
"My favorite card so far would have to be "Fathom Feeder." In a set with giant-sized alien creatures and very game-altering spells, this little fella slides under most people's radar. At just 1/1 he doesn't do much damage, but any creature he tags dies immediately. He has both of the new mechanics and his activated ability to draw cards is very powerful as something you do with leftover mana. Powerful early at stopping an opponent who's rushing out creatures. Strong late by letting you pick up extra cards. This little fella does it all." Has played for 20 years; is a Level 2 MTG judge

Chey Scott:
"I am definitely most excited for the return of the Ally creature type. I love building decks with creatures that build off each other and overwhelm opponents with tribal synergy, like giving all other creatures +1 counters, double strike, first strike, lifelink, vigilance, etc. The return of allies has me so hyped I've already gone out and bought most of the allies from the last Zendikar set, and I hope an ally deck in the Modern or Standard formats becomes viable. The ally cards in the new set I'm definitely getting include: Lantern Scout, Drana's Emmissary, and Drana, Liberator of Malakir." Played for 1 year

Ronald Schoonover, Jr.:
"Zada, Hedron Grinder and the [Zendikar Expeditions] Flooded Strand. Zada is just going to be so fun to use in friendlies (matches with a group of friends), which is really all I play. My playgroup always tends to fall back on the gooby decks, and Flooded Strand is just so pretty... it's a shame it'll be a couple hundred dollars." Played for 1 year

Will Mann:
"Omnath, Locus of Rage, and Noyan Dar, Roil Shaper. Their commander potential is limitless. As Standard play goes, Omnath is pretty bland but Noyan seems baller with its awakening ability after every instant/sorcery." Played for 4 years 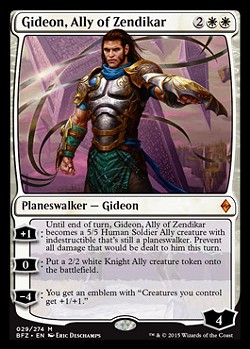 Gideon is here to save the day.

Cody Cook:
"I'd probably say "Gideon, Ally of Zendikar." He just synergizes with a lot of creatures so well, and the fact that he is just good overall... not to mention he looks like a cross between Bruce Willis and Patrick Dempsey from Roadhouse." Played for 4-ish years

Josh Arnold:
"I feel that Ob Nixilis, Reignited will be a tremendous addition to a deck that I am currently working on which wants to draw as many cards as possible, and both his +1 and ultimate abilities make this archetype even more powerful." Played for ~17 years

Eric Elvigan:
"I really like Transgress the Mind and Drana, Liberator of Malakir for standard constructed. Endless One has the potential to see play in multiple formats, but Ulamog, the Ceaseless Hunger and Oblivion Sower are the only cards I can see for now that could have an impact on Modern or older formats. Really nothing groundbreaking in the new set thus far beyond the fancy fetch land inserts." Played for 21 years

Will Hall:
"I'm really curious what Painful Truth can do. Its costs make it a bit awkward, but it lets you pay 3 to draw 3 cards, which is extremely powerful. Also, Brutal Expulsion has a steep casting cost, but provides some really unusual and versatile options. It seriously does a ton of stuff, though none of them is amazing on its own." Played for 1 year

Christian Smith:
"As an avid red, spell slingin' Planeswalker I look to find the most bang for my buck (or in the case of MTG, for my mana) so I like cheap that has a large effect on the board. First is Zada, Hedron Grinder, a super sweet goblin that packs a punch for your whole team of creatures and can even potentially win you the game, doing nothing but chilling and looking pretty. Secondly would be Dragonmaster Outcast, he's a human shaman that kicks it with his dragon homies all the time — he didn't choose the thug life, the thug life chose him." Played for 5 years

Justin Naylor:
"Battle for Zendikar is an anniversary for me because I started going to tournaments during the original Zendikar block (2009). My favorite card in the new set is Undergrowth Champion because it's a creature that can get stronger quickly and it fits with a lot of other cards. Synergy is important." Played for 6 years