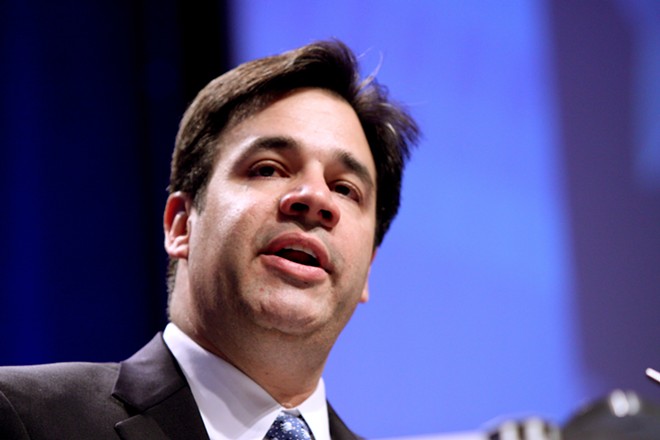 Robert Draper’s Do Not Ask What Good We Do: Inside the U.S. House of Representatives, highlights Labrador’s first year in Congress, along with other freshmen congressmen:

Just before the vote was scheduled, Raul Labrador was summoned to the Speaker’s office.

Boehner knew that the Tea Party freshman was never one to mince words. So the Speaker cut to the chase: “Are you with me?” he asked.

”I’m sorry, I’m not,” Labrador replied. “This is not a bill I can support. I actually think this is a terrible bill.”

“Well, I need you with me on this,” Boehner pressed.

“I understand. But I can’t vote for it.”

Labrador saw the Speaker’s strength as his weakness: he was fair and believed others would be, too. Boehner had actually told Labrador one time, “I trust Harry Reid.”

Labrador had nearly come unglued. Are you out of your mind? Labrador was a lawyer. By training he had learned it was wise to assume the worst in people. He didn’t trust Reid. He thought Obama was lying to the American people about the government running out of money on August 2.

Then Labrador added, “But I’ve talked to several folks and I know how we can get out of this mess. If you can amend the bill to make it closer to Cut, Cap, and Balance, I think I can get you some votes. I’ve been talking to people all day—I think I can convince maybe ten people.”

Despite Labrador’s tough stances and his occasional obnoxious outbursts in conferences, the Republican leadership and the whip team admired his willingness to work toward a positive outcome.

Boehner brought in a legislative assistant. “Allen West would tell you, the bill is basically Cut, Cap, and Balance,” the aide said.

“It’s not even close,” Labrador scoffed. He acknowledged there were political considerations. West’s district is like sixty percent Medicare recipients.” By contrast, Labrador’s constituents were hard-core right wingers, the freshman told the Speaker. They made Labrador seem ideologically tame in comparison.

In Draper’s book, his clash with leadership comes up multiple times.

Raul Labrador frequently voiced his disagreement at the meetings with Boehner. “I didn’t come to Washington to be part of a team,”  the Idaho freshman would say. … Labrador spent the month of August explaining his votes to angry constituents, the majority of whom were of the far right, shut-‘er-down persuasion. They seemed to admire his independent streak… Washington might have a 9 percent approval rating, but not Raul Labrador.

“You’re just going to be against whatever leadership does,” [Rep.] Renee Ellmers said dismissively.

“And you’re just going to support everything they do!” Labrador replied.

The friction between the entrenched Republican members and the upstarts had intensified. Labrador was hearing whispered threats that the dissenters on major votes would be punished. If that happened, Labrador could easily foresee a coup against Boehner. He could easily imagine a new Speaker being voted in, charged with tossing out all the committee chairmen and replacing them with Raul Labrador-style revolutionaries.

It took only about a dozen members to nearly unseat Newt Gingrich in the mid-1990s, Labrador thought. You could find thirty members, easily.

Then, in 2013, Labrador made headlines for refusing to vote for Boehner as speaker. Back then, I asked him a little bit about why:

And at the very start of this year, his unhappiness with Boehner surfaced: As most of the rest of the representatives voted to reelect Boehner as Speaker of the House, Labrador remained silent as his name was called. For the most part, Labrador has chosen to remain quiet about the reasoning behind his speaker vote. But in a conversation yesterday, he told The Inlander some of his thinking.

“I decided to speak with my silence,” Labrador said. “There was nobody at that moment I thought would be a good speaker.”

Labrador explains that his complaint is mostly over strategy. Boehner recently agreed to a compromise raising taxes on the very wealthy to avoid the "fiscal cliff," without significantly cutting spending.

“I believe the Speaker is a good man. I don’t think he’s doing what he’s doing because he’s not a good man,” Labrador says. “He’s such a good man that he assumes the person on the other side is equally as good.“

Labrador doesn’t believe Boehner should be offering Democrats concessions so readily. Concessions to tax hikes, he believes, needed to be tied to immediate spending cuts. Delayed spending cuts, in his view, have a way of never happening.

“I think we need to be a little bit bolder and stronger,” Labrador says. “What I learned as an attorney with negotiations, if you take anything off the table, you show a weak hand.”

Toward the end of February, Republicans and Democrats will likely again battle over an agreement to raise the debt ceiling.

“I hope that our leadership goes in with a stronger hand,” when negotiating with the President Obama over the debt ceiling, Labrador says. “He’s not a dictator. He’s not a king. He’s the President of the United States. It’s Congress that sets the policy, not the President.”

In October of 2013, the Republicans shut down the government in an attempt to repeal, defund or delay the implementation of Obamacare. Labrador cheered Boehner’s willingness to fight.

In January, Labrador helped organize opposition to Boehner's re-election as speaker. He's criticized Boehner for being too willing to buckle under pressure, too quick to give up a good hand by folding.

But lately, Labrador has been proud of Boehner's ability to stand his ground. "I think he's done a very good job with this," Labrador says.

Many congressional reporters argue the ground Boehner has to stand on is limited, precisely because of Republicans like Labrador. If he folds now, National Review's Robert Costa reports, Boehner risks angering hardliners, further complicating negotiations for the upcoming debt limit.

"The insurgents are now his palace guards," the Washington Post wrote, describing how powerful the far right has become. After the shutdown, the New York Times cited Labrador as one of a small group of hardliners who "outflanked" House leadership. Labrador was among the first dozen House Republicans to sign onto a letter in August encouraging Boehner to refuse to fund Obamacare in the continuing resolution.

But in this fight, Labrador sees Republican unity, not division: "How could a small group of conservatives tie [Boehner's] hands? We have a majority of the conference with us. When leadership has been following a more conservative position, and listening to us as conservatives, we've had a more unified conference," he says. "The irony's that it's the ones who don't want to fight that find themselves in the minority."

In June of 2014, the defeat of Eric Cantor opened up the Majority Leader spot. And Labrador threw his hat in the right, even, perhaps, knowing it was futile. And this January, when Boehner was running for Speaker of the House again, Labrador was a little less dramatic and more pragmatic.

Today, I made a difficult decision in voting for John Boehner for Speaker of the House. Many constituents from Idaho contacted me to let me know that I should not support him. I want them to know that I did not make this decision lightly. I share the view of the majority of my constituents who are deeply frustrated by the way the House has run the last four years.

I understand that many of my most loyal supporters are angry with my vote. I ask them to remember that for the last four years I have stood tall for the conservative cause. In December, I opposed the end of year spending bill by opposing both the rule and final passage. Last year I ran for Majority Leader of the House when no one else was willing to stand up against the establishment in Washington. And every time over the past four years that the Speaker ignored the views of the Republican majority and the voice of the American people, I opposed him.

In 2013, I led the effort to oust Speaker Boehner from his leadership post. At that time, we had sufficient votes to be successful, but at the last minute several members changed their votes to support Boehner.

This year was different – even after 25 Republicans opposed the Speaker, we still needed 12 more votes. The votes were simply not there to defeat the Speaker. I think it is unwise to marginalize yourself when there is no chance of victory, which was the case today.

Before I cast my vote for Mr. Boehner, I spoke with him multiple times. He assured me that he wants to change the way the House is run. He cited my successful efforts last August in bringing conservatives together to pass two bills that would have secured the border and prevented Obama’s illegal executive actions.  He asked for my help moving the House in a more conservative direction and promised that this would be a model for how he’ll conduct himself as Speaker in the 114th Congress.

My vote for Mr. Boehner is not an endorsement of his past leadership. Just as I have done during my first two terms in office, I will continue to fight for the American people and hold our leadership accountable.

Now that Boehner is out, the focus again turns to Labrador. Labrador’s a member of the Freedom Caucus, which is getting blamed (or credited) for pushing Boehner out. I reached out to Labrador’s office this morning, hoping to get a quick interview with the Representative about his thoughts on Boehner now. No such luck. But he did send over this statement.

“Though I differed with Speaker Boehner on the pace of reform, I respect and admire him. He served Ohio and the House with distinction and grace. I wish him the very best.

“As for succession, today is not the day for such talk. But I am committed to supporting leaders who will keep our promise to the American people to fight for real change in Washington.”

One of the possible successors people have been talking about? A woman by the name of Cathy McMorris Rodgers, who, incidentally, is the representative in the district just west of Labrador’s. You may be familiar with it. The biggest city has a garbage-eating goat statue.