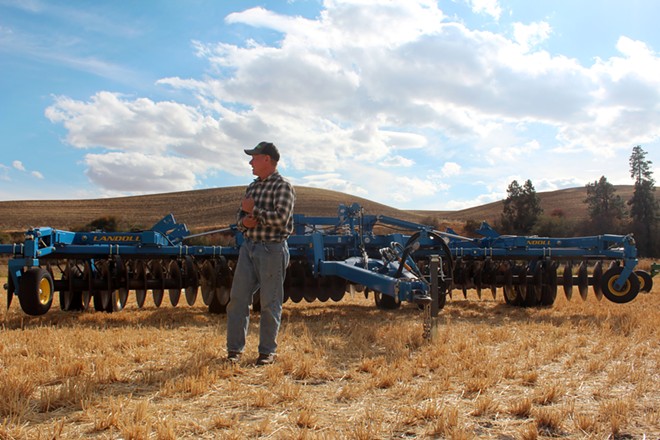 Chelsea Keyes photo
Randy Suess, 61, finished his last harvest at his family's century-old farm near Colfax, Wash. Agriculture experts worry that the aging population of farmers makes it difficult for younger farmers to break into the business.

COLFAX — Randy Suess, a 61-year-old family farmer, has finished his last wheat harvest. The tractors are stored in the metal shed, and Suess recently signed the paperwork to lease out the century-old family farm.

“It’s bittersweet — not only because of my own farmland, but we’ve been leasing from other families for three generations, and that was tough to tell them that a member of my family won’t be farming anymore,” Suess said.

U.S. farms are turning unmistakably gray, as younger generations opt for other careers and older farmers remain on the job longer than most American workers. The dearth of younger farmers has worried agricultural experts, who have pushed for incentive programs to encourage family farms to continue their operations.

Washington state has been at the forefront of this effort, spending millions to help beginning farmers — defined as those who have been farming for fewer than 10 years.

“Fifty to 100 years ago, farmers would have kids, and you would have the succession plan set,” said Patrick Lewis, executive director in Whitman County’s Farm Service Agency, which provides support to Palouse farmers. “I don’t know if that’s still the plan.”

State and federal agencies are developing programs to assist young farmers who often struggle with high startup costs, particularly with the recent dip in prices for many staple crops like wheat.
click to enlarge

For example, the federal Transition Incentives Program provides two additional rental payments on land enrolled in expiring Conservation Reserve Program contracts, as long as the owner sells or rents the land to a beginning farmer. This program helps younger, aspiring farmers get started in the industry.

The state of Washington has spent $2.2 million on the program within two years, the most spent by any state, said Jonelle Olson, who helps farmers navigate the program. After exhausting the original funds allotted in the 2014 Farm Bill, Washington was offered additional funds for the program this month.

The U.S. Department of Agriculture also offers loans to beginning farmers to mitigate the high costs of starting a farm and purchasing equipment. One concern is that older farmers, nearing retirement, are less willing to invest in innovative technologies that can improve U.S. production, experts say.

“A lot of the things we do day-to-day are helping these folks grow and stay in business,” Lewis said. “With so many farmers getting ready to retire, we’ve solidified a lot of these [programs].”

Experts like Carl Zulauf think these numbers can be deceiving. Zulauf, a professor and agricultural economist at Ohio State University, said the average age of farmers is growing nearly in sync with the U.S. labor force.

The 17-year age gap between U.S. farmers and the general labor force is due to a culmination of reasons: technology that eases the laborious aspects of farming, the sheer size of the baby boomer generation, and a love of farming.

As in all professional fields, experience is key. Zulauf said returning to the family farm may not grant that experience — at least, not initially.

“I always encourage my students to go work for someone else for their own personal growth before they go to their own family farm,” Zulauf said. “It builds their human capital. They are more willing to innovate, see farms in a different light, and be an independent thinker.”

Suess’ only son, Brian, decided against returning to the family farm. Instead, he is living in Spokane where he works as an insurance agent.
click to enlarge

Brian grew up in a sun-bleached brick house on the family farm in Colfax, where he helped seed and harvest club wheat throughout his childhood. A half-mile away, his grandparents lived on Suess Road and farmed all their lives until they passed the farm down to Brian’s father.

“Being the last Suess kid around, I knew it was up to me to carry it along — or not, unfortunately,” Brian said.

Although Brian said farming is not his passion, it helped him develop skills that served him in the professional world.

“It was realistically the best experience of my life,” he said. “It taught me that if you want something, you have to work your tail off for it. It’s where I got my work ethic from — from Dad, Grandpa and the farm.”

Randy Suess’ transition out of the farm is nearly complete. He held an auction at his home for more than 500 people where he sold the majority of his farming equipment this month. This included tables covered with century-old farming tools that were used by his parents — everything from dusty hand scythes used to cut wheat to an old metal hand-crank drill.

A longtime friend of Suess — another family farm owner — has decided to lease the 1,350 acres of the Suess’ farmland.

Looking forward, Suess has begun applying to new jobs within the wheat industry.