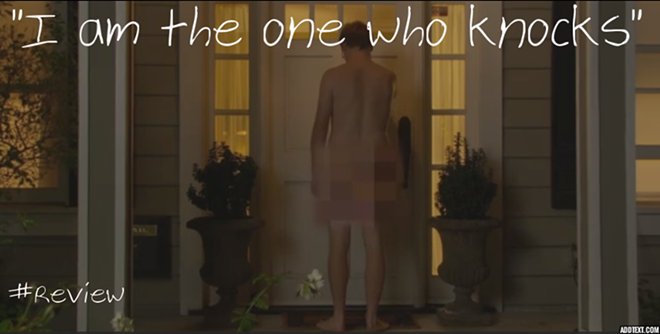 The difference between black comedy and black tragedy, often, is just a matter of stakes.

That’s one reason why this year’s season of Review is so wonderful. Andy Daly plays Forrest MacNeil, a straight-laced dweeb who sets out to “review” life on a five-star scale.

Last season, Review subsisted on cringe comedy, the hilarity of unintended consequences and the horror of being a man who just can’t say no to a dare, whether to eating 15 pancakes or getting divorced by his wife. But this season, as got darker and more cartoonishly goofy, it's become a commentary on something more.

can just as easily be read as a deconstruction and mockery of the Walter White/Tony Soprano style of “antihero” show. You know the type of story: Where ostensibly good men, battered by challenges and tempted by opportunity, become evil badasses in the pursuit of greatness.

They appear in based-on-a-true-story tales, as well. You have your Aaron Sorkin Asshole archetype, the jerk who’s awful to those around them, but in the pursuit of something great. Our iPhone, our Facebook pages, the foundations of our society were built on the Heroic Efforts of Difficult Men, you see.

Tenacity. Ingenuity. The refusal to ever back down, no matter the cost. These are the traits we love in our antiheroes.

Forrest slots nicely into this archetype. He had a gorgeous blond wife who he constantly lies to, whose life he destroys because he just can’t help himself. He sets out to kill a man, and despite struggling with it ethically, does so. The rules he sets for himself are arbitrary, but once he’s established them, they are intractable.

He lets his father’s house be engulfed in flames, because while walking around on his knees to review being a “little person,” he couldn’t reach the fire extinguisher. All he had to do was to stand up. But his pride and his ego won’t let him. If only, he laments as he barely escapes the blaze by walking as fast as he can on his knees, his father hadn’t put the fire extinguisher up so high.

In last week’s episode, Forrest’s beleaguered father delivers a monologue that, with a few changes, could have come from Skyler White or Carmella Soprano:

“Boy, it’s been a crazy year, hasn’t it? You picked a fight with that guy for absolutely no reason and got shot and nearly died. Broke up with that nurse in a way that she fired a gun into the house. Then you burned down the house and you broke up with another girl in a way that she fired an RPG and blew up another house. Then you asked me to fire a bunch of arrows at you—and I did! Then you got lost at sea for three months.

I never gave up hope. Through it all, I told myself, ‘Forrest is a good boy, and he always has been.’ But now a man is dead and you’re charged with killing him. What are your values, son? Did I raise you to have values where it’s okay to kill somebody? I hope not.

So I’m out. I just need to take care of myself now.”

The comedy of Review, and the inherent critique of such Great and Terrible Man shows, comes from the comparative lack of “greatness” of Forrest’s mission. Forrest never becomes a mob boss or meth kingpin. (He does, briefly, become a cult leader, but only briefly.) All the sacrifice, destruction and death that follows Forrest in his wake isn’t in services of a crime family or a drug deal or bringing down such evil men. It’s in service of his TV show. He believes his mission, rating life experiences, is so important that all the horrible things that happen because of it are simply in service of A Greater Good.

‘I need to be totally focused to get the f—k out of here,” he tells his producer Grant from inside prison. “I need to go home, okay. Or back to the office.”

Grant has none of it.

“Forest, where this gets done is less important than who does it. Everyone is so grateful for the sacrifices you’ve made. They look up to you. They’re inspired by you,” he says. “Imagine people seeing you here, in prison, how inspiring that will be to people. Don’t let the people down!”

With that, Forrest is given a new lease on life.

“Grant had given me the juicer to take and turn it into prison-ade!” Forrest monologues.

The interaction is not so different, really, from a pivotal scene in the middle of Breaking Bad’s run, where Walter White considers ditching the meth-cooking business. His boss, Gus Fring, attempts to dissuade him from leaving.

“What does a man do, Walter?” Gus asks in his soothing, deep voice. “A man provides for his family.”

“This cost me my family,” Walter seethes.

“When you have children, you always have . They will always be your priority, your responsibility. And a man… A man provides. And he does it when he’s even not appreciated or respected or even loved. He simply bears up and he does it. Because he’s a man.”

(And actually, For The Sake Of Great Television isn’t even that unique of a claimed motivation. The same sort of conversation took place a few times on UnREAL, Lifetime’s soapy drama set behind-the-scenes of a reality show. In multiple scenes of UnREAL, showrunner Quinn appeals to her protégé Rachel’s drive, vanity and desire for great TV to keep her on board doing evil, manipulative things.)

A fundamental theme of Breaking Bad is how unnecessary Walter’s crimes are. From the very first season, he’s given a clear way out: Take charity offered by his former business partners. But his pride won’t let him. Similarly, a fundamental comic conceit of Review is how silly it is for Forrest to continue filming the show that is destroying his life. He’s not being blackmailed or held at gunpoint. He can choose to leave. At the end of his review of “Happiness” last week, Forrest sums up his thoughts.

“Trying to be happy all the time led me to the thought: How much control do we have over our emotional life? Is it something we receive helplessly, like the weather, or is like something we can control…”

“Eh, no, my point was that the weather is something you can’t control.”

“But what if you move to Hawaii?” AJ counters cheerily.

“Yep,” Forrest admits. “That would be a way of controlling the weather.”

And that’s the point, really. For Forrest to be happy, he has to move from his destructive lifestyle. Moving on is a matter of quitting the show, finding something new. In last year’s season finale, he tried just that. But it didn’t stick.
Forrest draws too much meaning from his silly little show to let it go, no matter the cost. Whenever he thinks he’s out, they pull him back in.