It might not feel like it's autumn, but by this weekend we'll be living in October. It's true! Better start working on your Halloween costume. But before you get too far down that road, though, check out our event listings and Staff Picks for some fun to do between now and then.

Here are some highlights of the days ahead:

LIVE BANDS | The Pin plays host to a whopping night of hard rock Monday, featuring Simon Says Die, Ghost Heart, All But Lost, A Cryptic Ending, Method of Conflict and Heart of an Awl. The fun starts at 6:30 pm, and goes late.

WORDS | Local author and musician Chris Dreyer heads to Auntie's at 7 pm to celebrate the release of his new tome, The Toilet Was Broken and Other Awful Stories.

LIVE BANDS | Arizona's Roger Clyne and the Peacemakers are sneaky good, delivering rock-solid roots-rock with a bit of a Tex-Mex vibe, a natural given how close they are to the Mexican border when they're at home. They tour a lot, and they're stopping at the Big Dipper Tuesday. Here's a little sample of their sound, from their early days in a band called The Refreshments:

COMMUNITY | Drop by Spark Center to join a viewing and discussion of The Raising of America, a five-part documentary series about the importance of giving kids a strong start to their health and education. It starts at 6 pm.

LIVE BANDS | It's one monster-sized night of classic rock dropping in on the Spokane Arena Wednesday, as headliners Def Leppard are joined by Styx and Tesla. I've seen Def Leppard pretty recently, and they have no right to sound as good as they do at this stage of their career. Take a look at our story about a trip the British rockers made to Spokane back during their breakthrough Pyromania tour. I'm guessing we'll hear a few from that album Wednesday, like this tune:

COMMUNITY | The Spokane Folklore Contra Dance is every Wednesday night, and you can learn some steps and boogie to a live band for a mere $5, starting at 7:30 pm.

WORDS | Gonzaga U welcomes Kimberly Meyer for an appearance at 7:30 pm Thursday for its Visiting Writers Series. Meyer is best known for her nonfiction, and she currently teaches at the University of Houston.

LIVE BANDS | Talk about a mega-night in Spokane, Thursday night has a lot going on, starting with Death Cab for Cutie headlining at the INB Performing Arts Center. Always a strong live band, expect the trio to play a whole lot of their latest album, Kitsangi, along with some of their older faves. Here's our story about the band, and take a listen to one of their newer tunes:

COMEDY | If funny folks are more your bag, there are two awesome shows from touring comics in Spokane Thursday. John Mulaney, who was great on SNL and horrible on his own short-lived sitcom, headlines at The Fox — read our story about him here — while the hilarious standup and character actor Todd Barry headlines at The Bartlett. 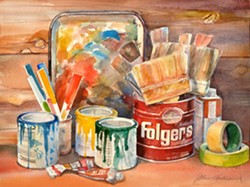 VISUAL ARTS | You'll find all sorts of information about this weekend's Visual Arts Tour in the new issue hitting the street Thursday, but one show worth noting now is the Spokane Watercolor Society Juried Show, with an opening reception at the MAC on Friday.

VISUAL ARTS/LIVE MUSIC | The once-a-year artistic extravaganza that is Terrain 8 is happening Friday night. Again, check out our new issue for stories on what's happening, what bands are playing, and all other kinds of goodies. And mark your calendar for this must-go event.