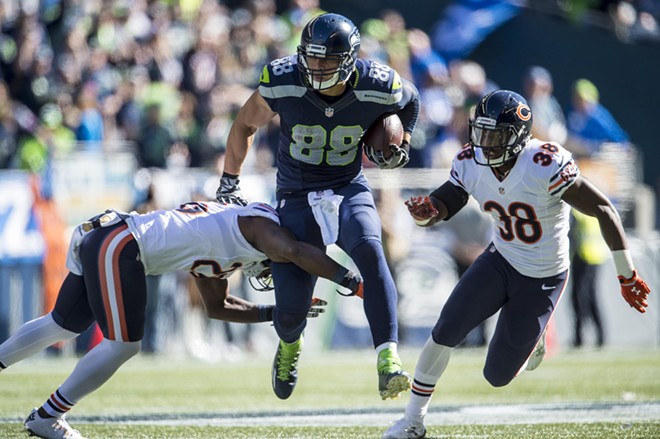 seahawks.com
Jimmy Graham got his first TD for the Seahawks in Sunday's romp.
There is joy across the land today as the Seahawks' season-opening two-game losing streak was dispatched with aplomb Sunday, as most of us figured it would be thanks to the team 1. finally playing a home game, and 2. facing a dismal Chicago Bears team that was starting a backup quarterback — and a backup to sad sack Jay Cutler at that.

I know there was panic among the 12s as everyone fretted over Kam Chancellor's holdout, wondered why new tight end Jimmy Graham wasn't catching TDs every quarter and imagined Russell Wilson's miracle water somehow wasn't working properly. On Sunday, in pitching a 26-0 shutout at the Bears in a game that included the returned Chancellor, and a Graham TD reception, and Wilson doing his typical thing (throwing for 235 yards and a TD, running for 28 more), the Seahawks put everything right with the world, at least for a week.

Suffice to say, that's not the case on every team. Have you seen what went down at Sunday's Washington Nationals game?
I don't know who to root for, both Papelbon and Bryce Harper seem like such, um, cool guys.

But I digress, we were talking about football. Besides getting Graham going with his first TD reception of the season (and seven catches for 83 yards overall), the Seahawks got a pleasant surprise in the running of Thomas Rawls, who dropped 104 yards on the Bears subbing in for a knicked up Beast Mode, who didn't play a whole lot. Oh, and Tyler Lockett returned another kick for a touchdown, making him arguably one of the Seahawks' best offensive weapons, even when he's more than 100 yards away from the end zone:

Next up for the Seahawks, another home game, this time on Sunday night against the 0-3 Detroit Lions. I'm going to go ahead and predict another Seattle win. You read it here first.

EAGLES ON POINT
EWU started its defense of the Big Sky title on the road at Sacramento State, and while it wasn't pretty and didn't include the explosive offense on display a week ago against Montana State, the win was huge for a couple reasons. One, it showed that that the Eagles can come back from a deficit, and do so by relying on the defense to make plays when the offense isn't totally shredding (as will usually be the case). And second, any road conference win is a big one, especially for a team that's had a couple of tough road losses early in the season. Don't be shocked if the Eagles find their way to the top of the conference by the end of the season, as they have the past three years.

The big highlight was junior wide receiver Cooper Kupp setting the career touchdown reception record for both EWU and the Big Sky Conference during the game. He now has 47 TDs, and we're just starting the season. The Eagles have a bye next week.

AROUND THE REGION
Idaho got worked at home by Georgia Southern, the UW Huskies should not have been as close as they were in a home loss to Cal, and former EWU superstar Vernon Adams, Jr. got benched during Oregon's home ass-whuppin' at the hands of Utah (full disclosure: I'm a Utah alum, and throughly enjoyed said ass-whuppin'). WSU had a bye.

BASEBALL SEASON ISN'T OVER
Okay, it pretty much is for Northwest hardball fans as the Mariners are eliminated from playoff contention, but the team reportedly might have found their new general manager in former Red Sox and Angels exec Jerry DiPoto. Stay tuned on that.